This is a brief post remembering what Christopher Hitchens said about the death of Jerry Falwell Sr. The well known atheist held no punches in calling Falwell disgusting, evil and almost celebrated his death in 2007.

“If you gave [Jerry] Falwell an enema he could be buried in a matchbox.” 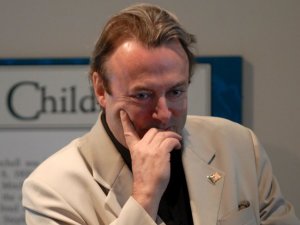 The other day I was doing some research and I came across some information of what Hitchens thought of Jerry Falwell Sr. Hitchens once said that if you could give Jerry Falwell Sr an enema then you could bury him in a matchbox. When Falwell died in May of 2007 Hitchens did not hold back on his contempt for Falwell. The tragedy as Hitch said is that Falwell deserved to go to hell, but that was not possible as hell did not exist. Here is more of what Christopher Hitchens said about Jerry Falwell Sr in Slate the day after his death.

“The discovery of the carcass of Jerry Falwell on the floor of an obscure office in Virginia has almost zero significance, except perhaps for two categories of the species labeled “credulous idiot.” The first such category consists of those who expected Falwell (and themselves) to be bodily raptured out of the biosphere and assumed into the heavens, leaving pilotless planes and driverless trucks and taxis to crash with their innocent victims as collateral damage. This group is so stupid and uncultured that it may perhaps be forgiven. It is so far “left behind” that almost its only pleasure is to gloat at the idea of others being abandoned in the same condition.”

In that same article he continues and what catches my eye are the last two paragraphs.

“Like many fanatical preachers, Falwell was especially disgusting in exuding an almost sexless personality while railing from dawn to dusk about the sex lives of others. His obsession with homosexuality was on a par with his lip-smacking evocations of hellfire. From his wobbly base of opportunist fund raising and degree-mill money-spinning in Lynchburg, Va., he set out to puddle his sausage-sized fingers into the intimate arrangements of people who had done no harm. Men of this type, if they cannot persuade enough foolish people to part with their savings, usually end up raving on the street and waving placards about the coming day of judgment. But Falwell, improving on the other Chaucerian frauds from Oral Roberts to Jim Bakker to Ted Haggard, not only had a TV show of his own but was also regularly invited onto mainstream ones.

The evil that he did will live after him. This is not just because of the wickedness that he actually preached, but because of the hole that he made in the “wall of separation” that ought to divide religion from politics. In his dingy racist past, Falwell attacked those churchmen who mixed the two worlds of faith and politics and called for civil rights. Then he realized that two could play at this game and learned to play it himself. Then he won the Republican Party over to the idea of religious voters and faith-based fund raising. And now, by example at least, he has inspired emulation in many Democrats and liberals who would like to borrow the formula. His place on the cable shows will be amply filled by Al Sharpton: another person who can get away with anything under the rubric of Reverend. It’s a shame that there is no hell for Falwell to go to, and it’s extraordinary that not even such a scandalous career is enough to shake our dumb addiction to the “faith-based.”

For me this is who Hitch was as an individual. He was someone who was bold, and who spoke his mind. Many people would privately say Falwell was disgusting or have contempt but few would say it in the manner that Hitchens did.  And Hitchens it appeared was basically  celebrating Jerry Falwell Sr’s death. Death is not always a reason to mourn. Hitches for me was unique in that manner. He was a master with words and could say things that would drive the point home in many ways. When Hitchens died of cancer in 2011 one of the pieces that stuck with me was a tribute that a Jewish Rabbi wrote in the Associated Press. You can see that here. And yet with a couple of exceptions  (see here and here) many evangelicals held Hitchens with contempt. Or they felt threatened by him in many ways. One of my personal regrets is that Christopher Hitchens called Washington, D.C. home for three decades. And part of my time in this area overlapped with him living in D.C. To this day I wish I would have gone and seen him speak or or watch him debate in person. I never did, actually it wasn’t on my mind. I really started to discover him right after his death.

Burt returning back to Jerry Falwell and Christopher Hitchens what I am going to do is leave you with these two clips of Hitchens speaking his mind about Falwell Sr. The tragedy that the atheist movement has in my opinion is that no one has come along who can fill the shoes of Hitchens. He was a unique and once in a lifetime individual. And after all this time the void is still there, I actually see it when I read and look into atheism. Yes his books remain and his YouTube clips remain but its not the same. One can only imagine when you see what Hitchens says about Jerry Falwell Sr what he would say about Robert Jeffress or Franklin Graham today.