The other day I found a clip by a British ministry on YouTube featuring Ravi Zacharias. The clip was about Zacharias meeting with Joel Osteen and towards the end he mentions how can you show what is counterfeit when you don’t know what genuine is? And this comes from an evangelist who engaged in fraud for decades. Was this clip a plea for help or the conniving from a sociopath?

“No psychologist should pretend to understand what he does not understand… Only fools and charlatans know everything and understand nothing.”

The father of a righteous child has great joy; a man who fathers a wise son rejoices in him. 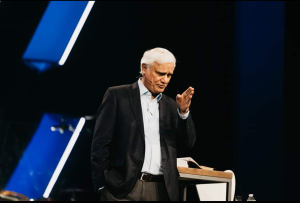 The other day I was looking at YouTube and I came across a brief video of Ravi Zacharias posted by e British evangelical ministry. The video is only about two minutes and is about Zacharias thoughts on Joel Olsteen. Olsteen, as you may know, is the controversial prosperity gospel preacher in Houston.  He has one of the largest television ministries in the world. In the brief video he speaks about how he and his wife were having dinner with Osteen. In a dinner Osteen said that there is not much of a difference between Islam and Christianity. Zacharias wife held her composure. Zacharias then explained to his wife the problems with Islam in that they don’t have the Bible, they don’t believe Jesus is the son of God. They don’t believe in the New Testament and the don’t believe Jesus died on the cross. They also don’t believe that Jesus rose again from the dead and that he is coming again. Zacharias then says that the Muslims have shown Christians that we don’t know what we believe. Christians are not mentioning the cross today according to Zacharias. He goes on to say that you can’t show counterfeit if you do not know what genuine is. And evangelicals are going to be hurt from this lack of proper teaching. I just want to do this brief post as I found the video disturbing.

When You are Engaged in Deep Fraud How Can You Teach Proper Teaching?

This blog has written a couple of articles about Ravi Zacharias. Steve Baughman, form the San Francisco Bay Area has done a solid job revealing and showing how Zacharias is a fraud. You can read more about this in, “Guest Post by Steve Baughman: George Floyd and the Evangelist Ravi Zacharias. The Cognitive Dissonance of the Evangelical Industrial Complex When It Comes To Scandal.” But listen to that clip by Zacharias its only two minutes. Toward the end Zacharias asks if you do not know the counterfeit how can you know what genuine is. Sometimes in light of the Zacharias scandal of inflated education credentials, dishonesty, sexting, etc… these talks take on a different meaning. When someone says that if you do not know the counterfeit how can you know what the genuine is, and then you are engaged in fraud. Is this a plea or a cry for help from Zacharias? Is this someone trapped in his own lying, and he knows he is lying and wants a way out; but knows the consequences if he comes forward and admits he deceived people?

No one made Zacharias lie except Ravi Zacharias himself. This situation shows that the evangelical models of preaching and teaching are flawed and not sustainable. When you emphasize proper teaching and you yourself are engaging in fraud how do you deal with that? Its almost a chicken and an egg question as I think about it; which came first? Who is responsible for this system? Is is Zacharias and the fraud that he engages in? Or is it the system that sustains it? Or is it both with one feeding the other?

Everyone Has a Choice When Confronted With a Charlatan

Ravi Zacharias is not the first charlatan to appear on the religion scene. They have come and gone frequently. The Mark Driscolls, James MacDonalds, C.J. Mahaneys and more will always come and go. The fact of the matter is that people have a choice with people engaged in fraud. What are they going to do when confronted with the facts? I had to face this as an evangelical at one point myself. It was not easy but I also wanted to do the right thing. Doing the right thing in time cost me a lot but I was also true to myself. Which is the most important aspect when it comes to the bigger picture. If you will not be true to yourself then such a person does not deserve to be respected. Its funny, because evangelicalism is all about what it means to be a man. And in the end when you boil it down its all show and lacks substance. Those who face the charlatan and reject him are the ones who deserve to be respected. But good luck finding them in evangelicalism.

One thought on “Ravi Zacharias on Joel Olsteen. How Could So Many Evangelicals Follow a Charlatan?”