There was a tweet by Adrian Gibbs recently that looks at how leaving the evangelical system is like grief for many former evangelicals. Indeed, when you walk away from evangelicalism you do grieve as you comprehend how much of your life was stolen and wasted. Its a hard process and its akin to mourning a death. But grieving the loss of evangelical faith is a process everyone must do on their own.

There is a time for everything, and a season for every activity under the heavens: 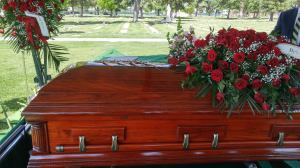 Funeral service from an evangelical church in Indiana

The other day on Twitter I saw a tweet that gave me pause and it was put aside for this post. It hit the nail on the head and addressed a topic that I think everyone who has become disenchanted with evangelicalism or faith has had to do when they walk away. They grieve when they realize that evangelicalism is not the faith system they thought it is. They grieve when they realize that they were conned or had. They grieve the time lost and precious life they invested in the system which rejected them and tossed them out like a piece of trash on the side of the interstate freeway. Look at what Adrian Gibbs said below and then this blog will explore it.

Something I think is common in former evangelicals is a kind of grief over the years lost, years hijacked by a system of belief. Countless hours spent. And whether entirely true or not, when you leave church there’s a lingering feeling that you have nothing to show for it.

Mourning Evangelicalism and What Is Lost

When I made the decision to walk away from evangelicalism the final time I already knew what would come. In many ways I had already prepared for and expected it. As readers of this blog know I lost my parents in 2017 and 2018 and am familiar with the grieving process that comes with death. Well, when a church experience or faith dies there is also a grieving process involved in that as well. Its hard, painful and its a topic that is not discussed very often, if at all. What do you mourn when one leaves evangelicalism?

After everything I said up above you have nothing to show for it. You become thrown away by the system. Like trash on the side of the road or used condoms under the bleachers from your high school. You are thrown away and you are left with nothing to show for it. Just a wasted life. You stop and think of all the waste that took place and you grieve and mourn. Its like the death of a loved one, as grieving is hard work. But another aspect that is hard to come to terms with is that you realize you were conned. You were sold a bill of goods about the evangelical faith. And in the end it did not work.

Its a hard process going forward as you undo the damage from evangelicalism. It is a process that takes one step at a time. And in that process it will involve a lot of grieving.