For Giving Tuesday Rod Stafford’s Fairfax Community Church did a financial campaign that this blog views as highly manipulative. In a fourteen hour period the church pressured people to give money to the church and did so in the middle of the COVID-19 pandemic. This church has long been abusive through their financial campaigns and been greedy. Its reflective of Rod Stafford, a pastor known for his greed and who this blog is going to refer to as the Steven Furtick of the Washington., D.C. area.

“Even the most beautiful scenery is no longer assured of our love after we have lived in it for three months, and some distant coast attracts our avarice: possessions are generally diminished by possession.”

“There is a very fine line between loving life and being greedy for it.”

The other day this blog learned of a financial giving campaign done by Fairfax Community Church here in the Washington, D.C. suburbs. Fairfax Community Church, or Fairfax Church as its starting to call itself (old habits die hard….) did a giving campaign that shocked and bothered someone who used to attend this church. They reached out to this blog and passed on some emails to me. When I studied them I was taken back by how blatant and bold this giving campaign is. Shortly after Thanksgiving on Giving Tuesday Rod Stafford’s church sent out five emails demanding and begging and placing pressure on people to give money. This in a middle of a pandemic with high unemployment, economic uncertainty, and more. In some rather typical Fairfax Church behavior there was no concern for the people who attend.  All Rod Stafford cares about is his own economic wellbeing, his own pocket book and himself.  But take a look at the following pleas for money that were sent all in one day.

The first email was sent on Tuesday December 4, 2020 at 7:04 in the morning. This would be the first of many for Giving Tuesday. Here is the email that was sent to the congregation. 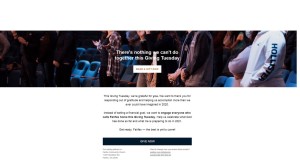 The next email came at noon and included a video with an appeal by Fairfax calling on people to give money. Below is the slide and the video presentation. 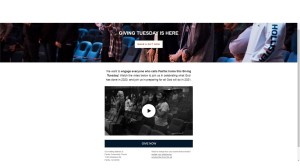 The third email was sent out by Fairfax Church at 3:19 in the afternoon. This is what it said.

Then two hours after that another email at 5:59 p.m. followed talking about how many people have given to this giving campaign. This included another video as well. Below is what the fourth email is about. 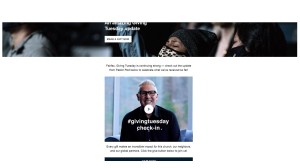 Rod Stafford in his Steve Furtick look of groomed and greased hair. He missed his true calling of being a used car salesman.

As the evening passed and started to turn into the late night there was another plea for money at 9:06 p.m. The last email was still encouraging people to give to the church.

A Story of Greed, Disconnect, and Apathy of Rod Stafford on Full Display in the COVID-19 Pandemic

Fairfax Community Church has long struggled with greed. This is a church that is frequently doing financial campaigns and asking people to give. Rod Stafford is frequently speaking about how they need to expand to accommodate people and do better ministry. And the reality is that Rod Stafford can’t be a good steward of what he has, why should he be entrusted with more money? The sad part about all this is that the Church of God in Anderson, Indiana looks at Fairfax Community Church as being a model for urban ministry. That tells a person all they need to know about the Church of God Anderson, Indiana denomination. At Fairfax Community Church there is an unusually high turnover rate of people. People come, they can’t get into ministry or get help. Meanwhile the church asks them to give and people do so. Frustrated people leave and go elsewhere. This is a church that has no shame in their financial campaigns and targets those who are vulnerable or not economically independent from their parents. In past campaigns Rod Stafford’s church has targeted elderly people and college kids as part of their giving schemes. Donna Stafford who is Rod’s wife is into the prosperity gospel and admires and reveres Joyce Meyer. You can read more about that in, “Donna Stafford, Joyce Meyer and a $23,000 Commode.” As for questionable campaigns those can be read about in the following post, “Fairfax Community Church and the Evangelical Idol of “Church Growth” Please note after writing about this issue in the past the church took down their video in the post.

This time the United States is in the middle of the COVID-19 pandemic and now they are asking people to give again? Where is the sensitivity to economic hardship among people in the community they claim to live? You can read about the economic hardship of some small businesses in Northern Virginia here. Unemployment has gone up in Fairfax County. Fortunately its not as bad as in Maryland, but its still elevated. Meanwhile the Washingtonian is keeping tabs on restaurants that have closed due to the pandemic. But don’t be fooled on the claims that Fairfax Community Church is giving to Lebanon, or help the local community. Many people learn the hard way and people email this blog their experiences when they are in need and ask for help only to be ignored. This blog told the story of a female who was allegedly suicidal and a part of Rod Stafford’s church. In a mental health crisis she contacted the church for help and was ultimately ignored. Even when she allegedly communicated her suicidal tendencies Fairfax Community Church gave her the brush. You can read more in, ““They Don’t Care About You!” A Woman Dealing with Suicidal Thoughts and in a Crisis Allegedly Couldn’t Get Help by Fairfax Community Church.” When this church transitioned into a megachruch Rod Stafford became more aloof, distant and living in a bubble. Its what happens when a church crosses the barrier from 200+ to over 300 people. Rod Stafford is going to be apathetic because for Rod this business is about money.

Here is what stuns me and when I was shown these emails its why I decided to write this post.  In writing a blog about religious intelligence this blogger has seen a lot of material. I have seen some of the paperwork for Sovereign Grace and spoken to people at Mars Hill and Harvest Bible Chapel.  THIS is the first time I have seen a church in a brief timespan of fourteen hours email people repeatedly and pressure them aggressively. And what for might I add? The emails were quite manipulative and pressuring people to give. A church should never operate in that manner. People should not be pressured to give. Nor should they be guilted to give.  If a person wants to give they should do so without any pressure or attachments. How many people of Fairfax Community Church have fallen on hard times because of the financial shutdowns? How many at Fairfax Community Church know someone who contracted COVID-19 and is having problems going forward and still dealing with medical issues? I most likely would not have written this post is this were for a COVID-19 benevolence fund or something similar. But that is not what is happening here.

So as I will say before and will say again. Get involved in Fairfax Community Church at your own risk. I was the whistle blower about this church employing a person on the Virginia sex offender registry. Rod Stafford lied. He lied to the church about Eric Nickle. He lied to the congregation and the community. His church bullied and pressured a local news station not to break the story. All this in the model of Jesus. Want to read more go to, “The Stress of Being a Whistle Blower in a Washington, D.C. Mega Church. Plus How Did Fairfax Community Church Bully a TV Station Not to Report a Scandal? Was Loretta Rogers Cooper Responsible for that Action?” Rod Stafford as a pastor is a greedy bastard. The Steven Furtick of the Washington, D.C. area. This is about money for him. Ministry is about finances and money.