An interesting article published in a Utah newspaper in 2020 reported on “Vaccine Refugees” leaving California and moving to Southern Idaho and Northern Utah. Given the rise of the anti-vaxx movement inside evangelicalism, are evangelicals leaving California for Idaho and Utah? That is a question this blog would like to ask. Plus as the COVID-19 pandemic continues its important to remind people what Martin Luther said about Christians who act irresponsibly during a plague. No doubt Martin Lither would tear American evangelicals apart for their culture wars, anti-mask behavior and rejection of science.

“Science is a way of thinking much more than it is a body of knowledge.”

“Science without religion is lame, religion without science is blind.”

And Jesus returned in the power of the Spirit to Galilee, and a report about him went out through all the surrounding country. 15 And he taught in their synagogues, being glorified by all. 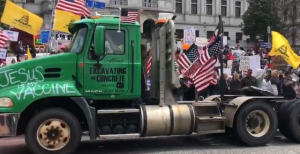 The other day I was scanning the news and the feeds of information I have set up and an article grabbed my attention. It comes from The Desert News in Utah. For those who are not familiar with the paper, its one of the larger dailies following the Salt Lake Tribune and is owned by the Mormon church. The newspaper has articles that are friendly to the LDS Church. In contrast, the Salt Lake Tribune has long been a critic of the Mormon Church and asked difficult questions. I recall once when I was flying through Salt Lake while in college the Tribune and an article I read in the 1990’s that angered the Mormon church. The Salt Lake Tribune explored the legalized brothel industry in neighboring Nevada and reported and the high level of Mormons that frequent brothels and keep the industry going. It really provoked the LDS.

Any the Desert News had an article that gave me pause especially when reflecting on the other issues this blog has been writing about in regards to evangelicalism. The article in the Desert News is reporting that “vaccine refugees” who are claiming religious exemption are fleeing California and moving to Southern Idaho and Northern Utah and claiming religious freedom. You can read the article in, “‘Vaccine refugees’ are leaving California for Utah and Idaho. Will that put those states at risk?” Please note the article came out in February of 2020, but this blog still finds it relevant. After all some are going to be resisting the COVID-19 vaccine.

Why Some Evangelicals Are Resisting Vaccines and Anti-Vaxx in California

In 2015 California cracked down on religious exemptions to vaccines. In 2015 the California Legislature passed Senate bill 277. To maintain herd immunity in California to ward off infectious disease 95% of the population needs to be immunized. In California in 2014 and 2015 that number had dropped to about 90% according to the Los Angeles Times. That had opened up the door to outbreaks and infectious disease such as the following. Diphtheria, hepatitis B, haemophilus influenzae Type B, measles, mumps, pertussis (a.k.a. whooping cough), poliomyelitis, rubella, tetanus and varicella (a.k.a. chickenpox) With that loop hole closed the number of vaccines has risen to 95.1% among kindergartner in the 2017 and 2019 school year. Many people found means to resist vaccines in other ways. To read what some people said, you can read, “Here’s what happened after California got rid of personal belief exemptions for childhood vaccines.” One of the vocal opponents to the tightening of California law in 2015 is Beni Johnson the wife of the senior pastor at Bethel in Redding. This blog plans to do a post about that topic in the near future.

Among evangelicals there are multiple reasons why some have rejected vaccines.

These are some of the reasons why some evangelicals reject vaccines. With the COVID-19 vaccine being rolled out expect to hear more griping and hysteria from this group. The Desert News article talks about how some are claiming religious exemption. And while the article does not specifically state that evangelicals are doing this, based on prior experience, conspiracy theories and observation this blog believes that evangelicals are leaving California to avoid vaccines. Here is one section of the article in The Desert News.

In February, the Idaho Statesman reported that families were moving from California to Idaho to take advantage of the state’s lax childhood immunization laws. In a series of public hearings, the parents asked lawmakers to think twice before placing any restrictions on vaccine exemptions. Some of the parents referred to themselves as “refugees” of the Golden State, and said they were pushed out by the new restrictive laws.

“I’ve been told my kids need to be exterminated and I should go to jail.” — Shalee Brindley, mother in Idaho

Shalee Brindley, a Bay Area transplant with two unvaccinated children, was among those parents.

Brindley said vaccines weren’t the only reason she left California — Idaho better fit her conservative values and her family struggled to find affordable housing in California, but when SB277 passed, it gave her the final push she needed to finally try and make a life in Idaho.

Despite the more “liberty-minded” attitude in Idaho, Brindley said she still faces backlash when she talks about her stance on vaccines. “I’ve been told my kids need to be exterminated and I should go to jail.” She has tried to keep their medical records private, but also wants to be an advocate for “medical freedom.”

Utah is also an appealing place for parents seeking exemptions, said Kristen Chevrier, leader of Your Health Freedom, a group that advocates for vaccine choice, and also organizes events — from movie screenings promoting unvaccinated children to symposiums on natural health.

In Utah, both philosophical and religious exemptions are allowed — and parents don’t have to specify what religious beliefs or philosophical justifications they use to seek an exemption, according to state law.

Parents who want an exemption in Utah, first have to watch a 20-minute video about vaccine preventable diseases. After watching the video, a certificate is sent, which parents then forward to their child’s school. Until 2017, when HB308 passed and allowed parents to fill out vaccination exemption forms online, it was more difficult to get an exemption: parents had to make a trip to their local health department clinic in person and get a signed note.

The information about vaccine refuges raises other issues which a professor from Messiah College in Pennsylvania wrote about recently. Over at his blog TheWay of Improvement Leads Home, John Fea wrote a post about how Martin Luther viewed Christians who did not take proper precautions during a plague. Martin Luther even said that Christians who rejected precautions and who exposed their neighbors to risk were guilty of murder. This piece comes from Mark Schwehn, Professor of Humanities in Christ College, the Honors College of Valparaiso University. Read below what he says.

Others [those who take no precautions] sin on the right hand. They are much too rash and reckless, tempting God and disregarding everything which might counteract death and the plague. They disdain the use of medicines; they do not avoid places and persons afflicted with the plague, but instead lightheartedly make sport of it and wish to prove how independent they are. . . . God has created medicines and provided us with intelligence to guard and take good care of the body so that we can live in good health. If they make no use of intelligence or medicine when they could do so without detriment to their neighbors such people injure their bodies and must beware lest they become a suicide in God’s eyes. By the same reasoning they might forgo eating and drinking, clothing and shelter, and boldly proclaim their faith that if God wanted to preserve them from starvation and cold, he could do so without food and clothing. Actually that would be suicide. It is even more shameful for them to pay no heed to their own bodies and to fail to protect them against the plague the best they are able, and then to infect and poison others who might have remained alive if they had taken care of their bodies as they should have. They are thus responsible before God for their neighbors death and a murderer many times over Indeed, such people behave as though a house were burning in the city and nobody was trying to put the fire out. Instead they give leeway to the flames so that the whole city is consumed, saying that if God so willed, he could save the city without water to quench the fire. (SOURCE: Martin Luther, Luther’s Works, Vol. 43: Devotional Writings II, ed. Jaroslav Jan Pelikan, Hilton C. Osward, and Helmut T. Lehmann, vol. 43 (Philadelphia: Fortress Press, 1999), 119-138).

This blog would encourage you to read John Fea’s post in, “Martin Luther on those who do not take precautions during a plague: “They are responsible before God for their neighbors death and a murderer many times over.”

In he view of this blog based one that information up above, Martin Luther would no doubt be calling out and condemning evangelicals in the United States. He would tear apart and criticize those who refuse to social distance and wear masks. Hopefully more people will learn about this information and that it will influence their opinion.

One thought on “Are Evangelical Christians Fleeing California Vaccine Requirements and Moving to Utah and Idaho? Plus Recalling What Martin Luther Said About Christians and Plagues”