Both religious and political history took place this afternoon. In the United States for the first time the non religious and secular organized a group to support a presidential candidate. Humanists for Biden launched and is revealing the organization of the nones to find people to speak for them and push back against evangelicals who are loud in politics.

“The secret of getting ahead is getting started.“ 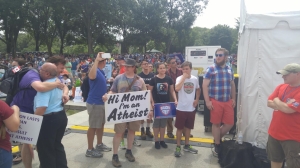 A fascinating development took place this afternoon that has huge implications for the secular and non-religious communities. For the first in modern history many atheists and secularists formed an organization that is supporting a political candidate. This was announced earlier by Hemant Mehta who blogs at The Friendly Atheist. And the significance of this is not lost upon him. This is what he is saying, “The launch of Humanists for Biden marks the first time that secular Americans have organized to fight alongside similar faith and conscience-based communities in support of a candidate for the nation’s highest office.”

The Non Religious Are Organizing Politically

The fastest growing group in the United States is the nones. The nones are individuals who do not believe in faith or God and as such do not practice. The nones have been steadily increasing over the last twenty years, In 2019 the nones represented 23.1% of the United States population. It actually grew from 21.6% in 2016. The organizing of the secular and those who lack faith has some broad implications for the United States. What happened this afternoon was bound to happen one day, it was a matter of time. And as I have studied and looked into some of these issues there has been concern about over reach by evangelicals which has alarmed the atheist and secular community. As of today there are as many nones as there are Catholics, what would happen if that ground organized politically and became a voice for secular and humanist values?

"The launch of Humanists for Biden marks the first time that secular Americans have organized to fight alongside similar faith and conscience-based communities in support of a candidate for the nation’s highest office."https://t.co/Raq0Cb2Zhf

This afternoon on Twitter Hemant Mehta teased people about a major news development that was going to happen. Here is how he phrased it.

After its launch in a unique sign the first group who came around and supported Humanists for Biden is the Mormon community in Latter-Day Saints for Biden. Perhaps this has to do with the complicated history that both atheists  and Mormons share, that of being minorities and facing persecution in their history.

Beautiful sentiment in response to our @humanists4biden launch, from our good friends and allies at @LDS4BidenHarris https://t.co/gY1wFJiIZA

The Humanists for Biden has the following individuals on the advisory council.

Some of these names I know because of the newsletters and sources I subscribe. Here is a breakdown of those listed up above. Debbie Allen is the Executive Director of Secular Coalition for America. Ryan Bell is a secular chaplain at the University of Southern California and also the national organizer for the Secular Student Alliance. Jason Callahan is a humanist chaplain and on staff at Virginia Commonwealth University in Richmond, Virginia. Greg Epstein who chairs Humanists for Biden is a humanist chaplain at Harvard and Massachusetts Institute of Technology. Mary Ellen Giess is the Senior Director of Co-Curricular Partnerships at Interfaith Youth Core in Evanston, Illinois. Vanessa Gomez-Brakeis the Assistant Dean of Religious Life at the University of Southern California and has the distinction of being the first humanist chaplain in a university setting. Sarah Levin founded Secular Strategies which has the goal of organizing those who are secular. Juhem Navarro-Rivera is the Political Research director and Managing Partner at Socioanalitica Research, and a Senior Fellow at the Institute for Humanist Studies. Megan Phelps-Roperis a former member and spokesperson for Westboro Baptist Church. Anthony Pinn is a professor at Rice University in Texas who focuses on African-Americans and religion constructive theology and humanism. Sasha Sagan is the daughter of Carl Sagan who works at teaching people how to raise kids without the influence of religion and having secular holidays. And the final person is Roy Speckhardt who is the Executive Director of the American Humanist Association and is based in the Washington, D.C. area. At Medium Humanists for Biden published a statement describing their goals.

At a time when the fastest growing “faith” group in the United States is people with no religious affiliation, we are delighted to announce an initiative of nonreligious people — humanists, atheists, agnostics, and others — proud to stand with the Biden-Harris campaign.

Humanists for Biden marks the first time representatives of the nation’s growing number of secular Americans have been invited to participate in a coalition of communities of faith and conscience, working together on a Presidential campaign. The Biden-Harris campaign is working to create the most inclusive campaign and administration in the history of American politics, and we are honored to take part in this effort.

While some of us have long been politically active, many of us are publicly endorsing a candidate for the first time. The stakes are too high, and the differences between the two campaigns are too dramatic for us to remain on the sidelines. We are grateful that the Biden-Harris campaign has given us a platform we can support. The religious values Joe Biden and Kamala Harris hold dear overlap with our humanist values.

The humanist community, like all others, is diverse. However, many of us share a number of goals: We support church/state separation; we respect science and listen to scientists; we want religious freedom for all Americans rather than only for a privileged few; we want a society committed to equity; and we want public policy that is rooted in facts and evidence. Beyond that, because we believe this is the only life we are guaranteed, we stand for racial, social, environmental, and economic justice for all Americans, now. There is no room for bigotry of any kind in this country. These are all values that the Biden-Harris campaign stands for as well.

At a time when science has become a partisan issue, when opponents of civil rights are frequently on the airwaves, and when the narrowest definition of religion has been used as a weapon by this administration, we must push back under the banner that unites us. We are humanists. We are good for the sake of being good, deriving our morality from compassion for our fellow human beings, and from a profound reverence for justice. We serve our country with love and honor just as our brothers and sisters of faith do. We want a secular government that fights for all Americans.

We members of Humanists for Biden are proud to have made our choice in this critical election. We urge you to make yours. Vote as early as possible, and join our movement regardless of your faith background.

If you would like to read more about this you can do so in the following articles.

What Does This Mean and Some Closing Thoughts

Today in the view of this blog is quite historic. Its a mark, an indicator as to how our society is changing and becoming more secular. And this blog openly welcomes it. What this means is that the secular, humanist, agnostic and atheist are finding their voice and starting to raise it. If you were to go back and ask what led to this in the opinion of this blog it would be the politicization of faith by evangelicals. When evangelicals were no longer just about practicing their faith but doing Supreme Court campaigns and the practice of politics in time they would trigger the atheists and secular humanists to counter act. Whereas the evangelicals in the United States do not know where Christian persecution is, many atheists and secular humanists do. There are many laws on the books that prevent atheists from holding office or to face job discrimination or more. Whereas Christian persecution in the United States is imagined when it comes to humanists and atheists and more it is very real. It will be interesting to see how this develops. As this group grows and flexes its muscle evangelicals will pout and cry in many cases, but when that happens they will have no one to blame but themself.