Washington, D.C. has strict COVID-19 guidance that has limited in meeting worship. On September 22, 2020 Capitol Hill Baptist Church filed a lawsuit against Mayor Bowser asking to be able to meet outside and for religious restrictions to be lessoned. If people can protest Capitol Hill Baptist can meet for worship. However this blog would argue that this lawsuit reveals the flaws to Calvinist theology.

There may be times when we are powerless to prevent injustice, but there must never be a time when we fail to protest.

And as they were speaking to the people, the priests and the captain of the temple and the Sadducees came upon them, 2 greatly annoyed because they were teaching the people and proclaiming in Jesus the resurrection from the dead. 3 And they arrested them and put them in custody until the next day, for it was already evening. 4 But many of those who had heard the word believed, and the number of the men came to about five thousand. 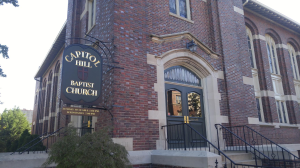 According to my research the last time CHBC met in person before the COVID-19 pandemic hit was in mid-March. Ben Lacey who is the senior pastoral assistant for Mark Dever gave the talk in the pulpit. When the pandemic began Capitol Hill Baptist Church had a very measured response in the view of this blog. Mark Dever taught that is was okay for people not to go to church in a medical crisis. You can read about this in the following article and see the link, “What Mark Dever and Jonathan Leeman of 9 Marks are Saying About the COVID-19 Virus and Church Attendance.” The church offered no virtual worship but created Bible studies and other programs. As time went on Capitol Hill Baptist Church did meet in Virginia which is across the river. CHBC met in the field behind 9 Marks Franconia Baptist Church for a couple  of months. This blog wrote a post about Nick Roark’s church in, “From Nick Roark’s Franconia Baptist to Mike McKinley’s Sterling Park Baptist Church; Why is 9 Marks Silent about Rachael Denhollander’s Statements About Allegations of Child Sex Abuse Cover-Up in Sovereign Grace?”  On the website of CHBC sermons started to be uploaded again in June of 2020. Some of the people who taught included Mark Dever but also others such as Ben Lacey, Bobby Jamieson, and Isaac Adams.  The first recorded sermons from the field behind Franconia Baptist is from July 19, 2020.

"Welcome to this gathering of the Capitol Hill Baptist Church" — words I've longed to hear since March 8! @chbcdc @MarkDever pic.twitter.com/p7D7mSsYcg

We are thankful to God for the 26 years of faithful service from you Mark. We praise God that he has kept you to himself, and you are leading us more and more to him. https://t.co/AZzS5IwN4r

While the pandemic dragged on CHBC put out a lot of resources to help people manage and respond to the pandemic. You can read more about 9 Marks and Capitol Hill Baptist Church in the following posts. “Caleb Morell of 9 Marks on How Washington, D.C. Churches Dealt with the 1918 Spanish Flu that Killed 3,000 Washingtonians” , “Garrett Kell, Jonathan Leeman and Mark Dever Discuss How to Shepherd a Flock During the COVID-19 Pandemic” and “Caleb Morell of 9 Marks Writes About How Washington, D.C. Churches Responded to the Second Wave of the Spanish Flu in December of 1918.” And honestly I thought that was commendable.

Bringing a Lawsuit Against the Washington, D.C. Mayor

As the pandemic dragged on and the city’s COVID-19 restrictions continued Capitol Hill Baptist Church applied for several waivers so that they could meet outside. Each time that waiver was not granted. When there were protests in Washington, D.C. over the George Floyd situation and following Black Lives Matter incidents people were allowed to protest in person under the First Amendment. The D.C. mayor spoke at one event and encouraged the protesting. Eventually Capitol Hill Baptist Church decided to bring a lawsuit against D.C. Mayor Muriel Bowser. The issue came up at a congregation meeting and allegedly 402 agreed to pursue a lawsuit while 35 were opposed. The lawsuit was filed on September 22, 2020. It appears as if First Liberty in Dallas is handling the lawsuit along with WilmerHale.  The lawsuit claims that the following issues were violated by D.C. government.

Capitol Hill Baptist Church has released a statement about the lawsuit which you can see below.

Since its founding in 1878, CHBC has met in-person every Sunday except for three
weeks during the Spanish Flu in 1918. That changed following Mayor Bowser’s first
orders concerning COVID-19 on March 11, 2020. Since that time, the members of
CHBC—most of whom live in the District—have been unable to meet in person, as
one congregation inside District limits (even outdoors).

We are thankful for our mayor and her dedicated efforts to support various
interests in D.C. balancing First Amendment freedoms with public health
concerns. Meeting in-person as one congregation is a deeply-held religious
conviction for which there is no substitute. Our simple desire is to have a
community and one that meets together safely.

CHBC has applied for multiple waivers to the policy, but District officials refuse to
provide CHBC with a waiver beyond 100 persons as part of a mass gathering. The
lawsuit filed Tuesday simply asks that CHBC be permitted to meet in-person, with
similar restrictions as area businesses and other gatherings have employed to
protect public health.

The Washington Post got a statement from Rev. Thomas Bowen, the director of the mayor’s Office of Religious Affairs. This is what was said, “The pandemic has placed us all in a tough situation, leading us to make adjustments to all aspects of our lives. We have engaged with congregations to ensure houses of worship can plan their services in a way that it is safe for everyone.”

If you would like to read more about this below you can find some links.

This issue happened for several days before I decided to write a response to this situation.  This blog has written heavily about the issues at Capitol Hill Baptist Church and 9 Marks. However, before writing a response I wanted to discuss it with a few people and seek their response and thoughts. I also wanted to discuss the issues with Calvinism as well with a couple of people. The writer of this blog will never be a Calvinist because the theology makes the problem of evil worse. You can read more about that in, “How Reformed Theology/Neo-Calvinism Make the Problem of Evil Worse: John Piper, Adam Lanza and a Massacre in Connecticut.”

The more I thought about this lawsuit especially in light of the type of Calvinist theology Mark Dever teachers the more I began to look at this lawsuit in a different light. This blog understands the frustration with some of the orders about not meeting in the pandemic. And again this blog thinks its a fair question to ask about how people can meet in one context but not another. However, here is the problem when you unpack this theologically. The Black Lives Matters demonstrators do not believe in the type of sovereignty that Mark Dever and Capitol Hill Baptist Church teaches. The type of sovereignty that is taught is an all encompassing where God knows every molecule. God is sovereign over every act and he ordains civil government as well. And yet here is the problem. If you look at the statement of faith for Capitol Hill Baptist pay close attention to the segment I underlined. “We believe that Civil Government is of Divine appointment, for the interests and good order of human society; and that magistrates are to be prayed for, conscientiously honored, and obeyed; except only in things opposed to the will of our Lord Jesus Christ, who is the only Lord of the conscience, and the Prince of the kings of the earth.”

So civil government is ordained until it is not. How does someone like Mark Dever know what is opposed to the will of God? How could many people know that at all? If I remember correctly Dietrich Bonhoeffer talks about when government becomes unjust and how to respond. But that is not what I am seeing here. God ordains all things and then the Calvinists create this wiggle room that turns around and challenges God’s sovereignty to where he is not in charge or an ordained world. That is an ongoing problem with Calvinism its like trying to hammer jell-o to the wall. The theological loopholes that can be created remind me of Mormonism which has many of its own loopholes and problems. So in the end as I interpret it God is sovereign until he is not. God has ordained government until he has not. The take away from this outsider is that by filing a lawsuit Mark Dever and Capitol Hill Baptist are sinning against the ordained government that is blessed and created by God that Muriel Bowser leads.

These Are the Issues That Surprise Me and Closing Thoughts

The more I have thought about this the more I have questions. According to my research there are over 857 churches in the city of Washington, D.C. alone. What are the odds that Capitol Hill Baptist is the first church to have taken such action? I live in the D.C. area and am familiar with the scene. There are many other churches that are more rooted in Christian nationalism that Capitol Hill Baptist. I would have expected some of those to have pursued legal action first. In the prior section I discuss some of the problems of Calvinist theology. But what if the motivation is much deeper than Mark Dever’s claim that a church must meet in live person and live streaming doesn’t count? Is the deeper reason money? Let’s be honest…Washington, D.C. is an expensive area to live. Its pricy and difficult. Is someone like Mark Dever having problems paying his bills or has his income declined from in person giving? Is it possible that finances are what is driving this in the end? Its the experience and belief of this blog that in the end most situations in life are dictated by money. Most of the time when you look at what influences a person its often money or finances. When you peal back the issues of this lawsuit is that what you find with this situation?  This COVID-19 pandemic is hard. And when I have been out and about in the Washington, D.C. area I am stunned by how many businesses have closed. Again these are questions that I have about this situation.

In the end I wonder if Mark Dever’s church could have negotiated or made a more stronger appeal before filing a lawsuit. This blog is going to monitor and write about this situation as it develops and moves forward. It will  be interesting to see how this develops.

3 thoughts on “Capitol Hill Baptist Sues Washington, D.C. Mayor Over Religious Freedom and in the Process Reveals the Flaws of Calvinism”