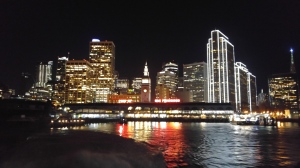 San Francisco, California from the Bay at night.

In 1852 San Francisco, California was a thriving city that was transformed by the gold rush which started in 1848. On September 9, 1850 California had entered the United States as a free state. During the gold rush some 300,000 people poured into the country through this western city. It was also during this time that a small Baptist church was established known as First Colored Baptist Church, which in time became Third Baptist Church in 1855.

This church became part of the African-American community and consisted of some who purchased their freedom from slavery in the south or family members. When the First Baptist Church was established the issue of slavery was a hot political topic in the United States. And on the horizon was the Kansas-Nebraska Act which would trigger civil war in Kansas which was a precursor for what was to be the fate of the country. This church became a key part of the African-American community in the city. During the history of the church famed civil rights leaders such as W.E.B. DuBois and Martin Luther King preached here.

Recently the Baptist News Global looked at the Baptist faith of Kamala Harris and noted that if she is elected she would be the fifth Baptist vice-president in United States history. The Washington Post also looked at her links to the Third Baptist Church in San Francisco which Kamala Harris attends. This is a brief article but when I stumbled across this while reading and researching another topic this blog wanted to do a quick post on this subject.

One thought on “The Baptist Faith of Kamala Harris”