In the spirit of science amidst a discussion about the COVID-19 vaccine a John Hopkins professor falls back on science and admits error when corrected. Its a beautiful example of what happens with a person when a mind is grounded in science. This blog posts compares this example with evangelical culture with how evangelicals just double down amidst conspiracy theories and how they dismiss facts they don’t like.

“Facts are facts and will not disappear on account of your likes. ”

“One thing I’ve learned as a scientist is that if you get something wrong, you need to admit it, learn from the experience, and move on. I was wrong.” 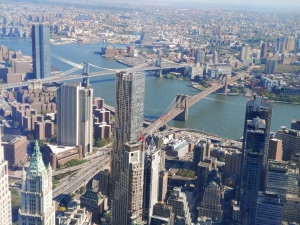 New York from the top of One World Trade Center

This blog is a firm believer of science and it has a a deep respect for atheists and secular humanists. This comes about in the writing and analysis of the issues in evangelicalism and what comes forward. There was an article in Forbes magazines the other day that illustrated the beauty and majesty of the skeptical mindset. It also highlighted what happens to those who are committed to truth. Evangelical Christians might learn a thing or two

Steven Salzburg is a well known computational biologist and computer scientist on staff at John Hopkins University in Baltimore, Maryland. At John Hopkins he is a member of the Institute of Genetic Medicine where he also is Director of the Center of Computational Biology. Salzburg’s academic background includes Yale and Harvard as well. He is well known for being an advocate for science and of the importance of teaching evolution in the public schools systems. He writes a science blog and also a column at Forbes magazine.

The other day Steve wrote a blog post about why we should start vaccinations against COVID-19 now. In the process he seemed to state that we can cut corners in vaccine work and accept other results in Europe, India and elsewhere. Phase III trials can be expedited. His blog post generated controversy and a lot of push back on Twitter. In addition an assistant professor of biostatistics at the University of Florida wrote an op-ed in the New York Times pushing back on what he is saying. In, “I’d Need Evidence Before I’d Get a Covid-19 Vaccine. It Doesn’t Exist Yet”

Here is part of what Natalie Dean at the University of Florida said:

Coronavirus vaccines are rapidly advancing through the development pipeline. The University of Oxford’s vaccine is in large trials in Britain, Brazil and South Africa. In the United States, researchers just began enrolling around 30,000 volunteers to test Moderna’s vaccine, and more trials are starting every day. Operation Warp Speed has set an ambitious goal of delivering 300 million doses of a safe, effective vaccine by January.

But the concept of developing a vaccine at “warp speed” makes many people uncomfortable. In a May survey, 49 percent of the Americans polled said they plan to get a coronavirus vaccine when one is available, 20 percent do not, and 31 percent indicated that they were not sure. The World Health Organization considers “vaccine hesitancy” a major threat to global health, and poor uptake would jeopardize the impact of a coronavirus vaccine.

This hesitancy isn’t surprising. Why should we expect Americans to agree to a vaccine before one is even available? “I think it’s reasonable to be skeptical about a vaccine that doesn’t exist yet,” Dr. Paul Offit, the director of the Vaccine Education Center at Children’s Hospital of Philadelphia, told Today.

I’m a vaccine researcher, and even I would place myself in the “not sure” bucket. What we have right now is a collection of animal data, immune response data and safety data based on early trials and from similar vaccines for other diseases. The evidence that would convince me to get a Covid-19 vaccine, or to recommend that my loved ones get vaccinated, does not yet exist.

That data can be generated by the large trials that are just beginning, known as Phase III or efficacy trials. Some have argued that we already have enough safety and immune response data to start vaccinating people now. But this would be a big mistake.

This is how Phase III trials work: Thousands of healthy adult volunteers are randomized to receive either a new Covid-19 vaccine or a control — a placebo or an already licensed vaccine for another disease. Then they go about their normal lives. They do not know what they have received (known as “blinding”) so the two groups behave similarly in terms of risk taking.

Participants are monitored for side effects and contacted regularly to ask about symptoms and to be tested for infection. The goal is to compare the rates of disease or infection across the two groups to measure how well the vaccine prevents Covid-19 “in the field.”

It is possible that some Covid-19 vaccines may not prevent infection entirely, but they could still prepare a person’s immune system so that, if infected, they would experience milder symptoms, or even none at all. That’s similar to the flu vaccine: It’s not perfect, but we advise people to get it because it reduces intensive care admissions and deaths.

How many people need to be protected by a vaccine before it’s recommended for widespread use? Ideally, rates of disease will be 70 percent lower in vaccinated people than in unvaccinated people. The World Health Organization says a vaccine should be at minimum 50 percent effective, averaged across age groups. (We know from influenza that vaccines don’t always work as well on older adults whose immune systems have declined.)

This benchmark is crucial because a weak vaccine might be worse than no vaccine at all. We do not want people who are only slightly protected to behave as if they are invulnerable, which could exacerbate transmission. It is also costly to roll out a vaccine, diverting attention away from other efforts that we know work, like mask-wearing, and from testing better vaccines.

I would encourage reading the rest of the op-ed in the New York Times.

When presented with scientific evidence of the necessity of following Phase III vaccine testing and Steve Schwartx reversed himself. He updated his column at Forbes and wrote another one admitting error. This is part of what he said in, “I Was Wrong: We Can’t Skip Phase 3 Vaccine Trials.”

I wrote a blog post over the weekend that has generated tremendous pushback, including an op-ed in the New York Times as well as thousands of comments on Twitter.

In my previous post, I suggested that while we’re pursuing Phase 3 testing of several promising Covid-19 vaccines, we could simultaneously offer those same, unapproved vaccines to a wider community of volunteers, as long as those volunteers were fully informed. The benefits of moving quickly, I argued, would outweigh the risks.

I was wrong. After reading many of the responses to my article, some of them outlining the risks in greater detail, I have concluded that (1) the risks are greater than I presented them, and (2) the benefits are not as great as I had thought.

On point (1), there are several risks that I didn’t emphasize sufficiently. One is that although phase 1 and 2 trials establish safety, they don’t tell the whole story. Phase 3 also looks at safety, and because many more subjects are involved, Phase 3 can identify less-common side effects that might still be very bad. (One example is ADE, which can make a viral illness worse than it would otherwise be.) These less-common side effects are a big risk of moving too quickly.

Another risk is that of trust: as many people pointed out on Twitter, if we expand the distribution of vaccines too quickly, and then the vaccine doesn’t work, we may seriously undermine the public’s trust in any eventual vaccine that really does work. That in turn will reduce the number of people willing to be vaccinated, which could cause serious harm to public health.

On the benefit side, my article assumed that we could quickly make millions of doses available before Phase 3 trials completed. I was wrong there too. We can and should ramp up production of vaccines before Phase 3 trials are over–and several manufacturers are doing just that, with government support. But these vaccines aren’t available in large quantities yet, and by the time they are, Phase 3 trials will be much further along.

Now pay attention to how Salzburg says in closing his blog post. He sums up in my view what makes science the gem that it is.

One thing I’ve learned as a scientist is that if you get something wrong, you need to admit it, learn from the experience, and move on. I was wrong.

The Bueaty of the Scientific Mind and What Evangelical Christians Can Learn From This (Will They Though?)

Steve Salzburg of John Hopkins provides an example of what is great about skepticism and the science-based mind. Then he states that as a part of science when confronted with evidence he admitted it and did so publicly. Being committed to the facts puts one in the position that they must follow and adhere the facts as they emerge. Currently some anti-maskers point to the flip flop on face masks earlier this spring. I take comfort in what science says about face masks because evidence pointed in that direction and led to change. The problem led to a solution and it showed how the scientific mind works – and its proven. This is part of the reason why I respect and revere science. Science in the end proves itself. It points to a way and shows a path forward. Studies, evidence, and facts actually prove itself. The scientific mind is a blessing to the human race.

Now take Salzburg’s behavior and compare that to the behavior of many evangelicals. I don’t have to go very far to see what evangelicals are doing. How many on Twitter and social media are pushing QAnon or conspiracy theories about COVID-19? The plandemic? Last weekend I am seeing some from the Harvest Bible Chapel community push conspiracy theories about the Disney Corporation being satanic. Is this part of another satanic panic again? And when presented with the facts many evangelicals instead double down. They dig in deeper hold the line and scream louder or tweet more. What they do is that they become tools for dismissing the Gospel. Whereas Jesus claimed I am the way, and the truth and the life, many evangelicals end up rebuking what Jesus taught. Why? Because many evangelicals are not about truth. Instead they live lives of dishonesty in that instead of showing what is possible with faith they became walking advertisements for atheism. Here a John Hopkins professor shows what is possible with humility. Many evangelicals can learn from his example. Will they? This blog has its doubts. After all if some from the Harvest Bible Chapel community are becoming consumed with conspiracy theories with Disney what’s next? A conspiracy theory about Chic Fil A and pedophilia? Outrageous you say! Well I would point out  that some evangelicals still believe that Proctor and Gamble are involved in satanism.