“The Civil War defined us as what we are and it opened us to being what we became, good and bad things… It was the crossroads of our being, and it was a hell of a crossroads.”

“In your hands, my dissatisfied fellow-countrymen, and not in mine, is the momentous issue of civil war.” 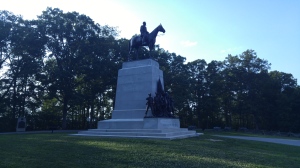 Statue of Robert E Lee on his beloved Traveller at the spot where Picket’s Charge began at Gettysburg on July 3, 1863.

The Civil War is a dark period in American history. And the scars and legacies from that era linger still. There are a few topics to consider in the wake of some of the news going on but I want to start by explaining how my thinking shifted on Civil War reenactments.

Civil War Reenactments in Kearney Park in Fresno, California and How I Viewed Them

I was born and grew up in Fresno, California. I was educated locally and consider Fresno my home. Even while living in the Washington, D.C. area I still consider Fresno to be home. This blog can’t recall when this started, perhaps it was about 1990 or so, but Fresno started to hold Civil War reenactments. The driving personality behind it at the time is talk show host Ray Appleton from KMJ 580, who is unequivocally the voice of Fresno. Former Fresno Mayor Jim Patterson also was involved. A strong supporter of these battles is the Fresno County Historical Society. In these re-enactments they would re-create different battles in Kearney Park. Battles such as Shiloh, Shenandoah, Antietam, etc… I grew up seeing these re-enactments and went down with my parents. As a history junkie who would set out to study history in college and eventually grad school I took the Civil War reenactments with fascination. They were in my mind an opportunity to show history and make it alive. These reenactments have been done for about thirty years now if my memory serves me correct. They have also become some of the largest reenactments in California and attract reenactors from the Western United States.

Again growing up on these I loved them. They were far away from the battlefields of Virginia or Georgia. It was something that I encouraged, and viewed those who criticized them as being politically correct. That is how I looked at them and attended these when they were held. My parents loved them as well.

Today I live in the Washington, D.C. area and have been here for fifteen years. My journey to D.C. took me from California to Wisconsin where I attended grad school and then out to D.C. area in 2005. As a northerner I discovered a different culture in Virginia. When I arrived in D.C. I got involved in an evangelical mega church called Fairfax Community Church. At a social event when I was brand new a guy pulled out a five dollar bill and put Lincoln face down on a table stated that is how he liked it. He commented that he was grateful Lincoln was assassinated. I was stunned hearing this when I did. In time I eventually explored a number of battlefields on the East Coast.  I walked Gettysburg, Antietam, Fredericksburg, Manassas, and the Civil War park of Richmond.  As I spent time on these battlefields which I consider to be sacred ground my thoughts on reenactments slowly changed. War, as I learned and studied and finally experienced when I saw the terrain is very ugly and different; is not something to joke about or take lightly.

But when I penetrated deeper into Virginia there were two things I noticed. One was a heavy southern accent. The other thing I noticed is more sympathy to the south and some people being in denial about the Civil War. I saw a number of Confederate flags. Outside of Fredericksburg, Virginia in 2007 I stumbled across a parade for Thanksgiving. At the parade the Daughters of the Confederacy were passing out flags of the Confederacy and posters of Robert E. Lee and Stonewall Jackson. They were given to me as they walked by. The Daughters of the Confederacy I realized was serious and as I saw people there I noticed that no blacks were present. Then I also realized in a disturbing way that some people have not accepted the final results of the Civil War. And some 140 years after the Civil War there were people still fighting the cause of the Confederacy. This really bothered me. It was during this time that I realized that some Confederate sympathizers joined reenactments with the goal of still resisting. Now here in Virginia there are still Civil War reenactments which you can see about here.  But when you consider some of the battles that were fought – 2,680 casualties at Bulls Run; 32,000 at Spotsylvnaia Court House; 42,000 at Petersburg, etc.. When you think of the fighting that took place, and horrific loss of life reenactments in Virginia take a very different meaning. This is a cultural issue that you need to experience out here.

As I have lived in Virginia for fifteen years now this has been something that I have observed over time. There are some people in the rural areas who are sympathizers or still can have hard feelings about the Army of the Potomac. For me its troubling that some people feel like that after all these years. This blog has written about an alternative reality with evangelicals and when you consider the mindset, one can  understand how some live in a bubble of alternative facts. Its a toxic cesspool from my perspective.  Maybe in reflecting on this, racial problems and troubling view of the Confederacy stem from Reconstruction ending in 1877. It ended prematurely and has left many people stuck in the South.

Why Confederate Statues Need to Come Down. However, Leave Them on Battlefields

I am not going to spend too much time on the issue of Confederate statues. I wrote about that after Charlottesville Neo-Nazi riot and you can read that post in, “Why Racism is a Sin, and Why Confederate Monuments in the United States Need to be Removed.”  Briefly Confederate statues need to come down because they are not honoring anyone, except a fallen and failed cause. Those who led the Confederacy were engaged in treason against the United States government. People erected statues not to honor their sacrifice in war, but to still resist the federal government and carry a cause forward. Many statues were raised in the Jim Crow era. And if you honestly think that these statues are about honoring Confederate war heroes ask yourself why is it that statues of James Longstreet were not raised? Why is James Longstreet absent? Longstreet, if you do not know played key roles in the Battle of Fredericksburg, second battle of Bulls Run, and Gettysburg. After the Civil War Longstreet who was one of the key individuals in the Army of Northern Virginia and Robert E. Lee’s most trusted general; criticized Lee and supported the federal government. Longstreet in the eyes of those who wrap themselves in the Confederacy committed treason, and that is why you do not see statues of him in the United States today.

It makes no sense to have Confederate statues standing in the United States. Imagine if Germany after World War II started to raise statues to German or Nazi military leaders. Would that make sense? What would the Federal Republic of Germany in Bonn (at the time) be communicating to the world? It certainly would not be healthy democracy.  When it comes to Confederate statues leave them on battlefields and cemeteries. But they should not be in town squares, cities, universities, and elsewhere.

In the news in the past few days there is discussion about renaming military institutions like Fort Benning, Fort Bragg and Fort Hood and others which are named after Confederate military leaders. What message does it send to the world and the military when those who fought against the United States are being honored?  Its a dishonor to have a military installation named after someone who engaged in treason against the United States. Its akin to naming a military installation after traitor Benedict Arnold. In addition, there are a number of incredible individuals who served selflessly and with dignity who have not been as recognized. Its time to change the names of some of these institutions. Overall there are ten Army installations named after Confederate Generals. Below are seven suggestions of what what Fort Bragg, Fort Polk, Fort Lee and others should be renamed as. And this could honor people in the military and better united the country.

There are other individuals who I hope will be honored in time, actually before my own death one day I hope a military installation is named in honor of Colin Powell, David Petraeus, and then we need to have a Naval Air Station named after John McCain.

In Regards to the Confederate Flag How Would You Feel Seeing Al Qaeda’s Flag Flying or Being Waved at the World Trade Center Memorial in Manhattan?

The Confederate flag is really a flag of treason. Its designed to represent hate, and the destruction of the United States. Stop and consider how many American soldiers died preserving the Union fighting against that flag. Is it any wonder why its a flag that has been adopted by hate groups, white supremacists, and Neo-Nazis?  Some of the most sacred spots in the United States are places like the Arizona Memorial in Pearl Harbor and the World Trade Center Memorial in Manhattan. 2,753 people were killed in New York City on September 11, 2001. Visiting the memorial today and the 9-11 museum below is a touching and emotional experience. You can look at some of the pictures I have taken below. 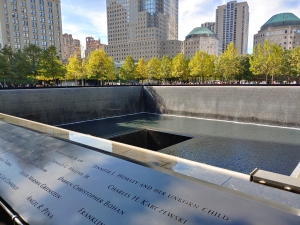 Now imagine if someone were to go on the World Trade Center Memorial  or the 9-11 Memorial Museum and started to wave the flag for Al Qaeda. How would you feel about that? I would be livid. It would be uncalled for.  Inappropriate and callous. It would  insensitive and disrespectful. And if that wouldn’t bother you as an American I would honestly wonder if you are human. However, in many ways when people fly the Confederate flag they are doing the exact same thing.  They are mocking the United States and those who died in preserving it. Waving the Confederate flag is like waving the Nazi flag, which is why you often see them together in Neo-Nazi rallies. The Confederate flag belongs in a museum which is where it should stay.

In the last few weeks I became shocked to realize how far behind the curve we are when it comes to race relations and injustice. We have a long way to go and a lot of work that needs to take place. The country needs healing and closure. Racial strife and the trauma it causes is still very real and problematic. I think for whites like myself the best thing we can do is stay silent and do some serious listening. There are times to speak and a time to listen. Now is the time we should be doing a lot of listening. In the process lets empathize with those who are hurting and who have been the victims of racial injustice. We need closure and one of the many ways that could help with that is retiring the Confederate flag and renaming military bases named after Confederate leaders. In both of those situations the time has arrived and its important to be on the right side of history.

13 thoughts on “We Need to Remember That the Confederacy Lost the Civil War. How My Thinking on Civil War Reenactments Changed From California to Virginia and Why the Confederate Flag Should Be Banned”