On June 1, 2020 a political stunt was staged in Washington, D.C. Protesters in Lafayette Square were attacked, tear gassed and beaten so the President can have a photo op in front of St. John’s Church. While many remained shocked court evangelicals like Robert Jeffress and Franklin Graham responded with awe and approved of the use of violence. Christian nationalism keeps going further and further into the sewer and in trying to analyze the court evangelicals this blog states that Franklin Graham and Robert Jeffress should be thought of as fluffers.

“Nearly all men can stand adversity, but if you want to test a man’s character, give him power.”

“You shall have no other gods before[a] me. 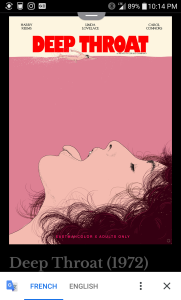 The movie poster for the pornographic film classic Deep Throat in the 1970’s.

Washington Post video on the Battle of Lafayette Square

The unrest and protesters that came out of Minneapolis, Minnesota swept the United States. As I write this post I remain stunned by the scope of the protests and have realized that every city that I once called home from California to Montana to Wisconsin to the Washington, D.C. area has had protests. But on June 1, 2020 something happened that was incredibly dark. And the way some evangelicals responded became equally disturbing. On June 1, 2020 protesters were peacefully protesting George Floyd’s death in Lafayette Square. Then Park Police and other law enforcement used tear gas and stun grenades on protesters. Some were beaten by law enforcement. And this was done so that President Trump could have a photo op in front of St. John Church. An Episcopal Priest was overrun and tear gassed in the process. A number of people were arrested, and an Australian press crew was hurt enough that the Australian government raised it diplomatically.

However inside evangelicalism those who are involved in Christian nationalism and their culture wars reacted to the violence with joy. The Atlantic interviewed Robert Jeffress of First Baptist Dallas. This is what was said in the magazine.

A few hours after the dystopian spectacle, I spoke on the phone with Robert Jeffress, a Dallas megachurch pastor and indefatigable Trump ally. He sounded almost gleeful.

“I thought it was completely appropriate for the president to stand in front of that church,” Jeffress told me. “And by holding up the Bible, he was showing us that it teaches that, yes, God hates racism, it’s despicable—but God also hates lawlessness.”

Other court evangelicals also approved with the use of force. You can read the entire story in, “The Christians Who Loved Trump’s Stunt.”

Our country has erupted in chaos. Everyone agrees that what happened to George Floyd was a terrible tragedy that should not have happened and should never happen again. But what has taken place with these riots is also a heartbreaking disaster for so many and for our nation.
I was asked if I was offended by the President walking out of the White House, which is his back yard, and walking over to St. John’s Church. Offended? Not at all. This made an important statement that what took place the night before in the burning, looting, and vandalism of the nation’s capital—including this historic house of worship—mattered, and that the lawlessness had to end.
And I’m not offended that he held up the Bible—as a matter of fact, I was encouraged! I appreciate it. I believe that God’s Word is the only hope for each individual and for our nation. The problem we are facing in this country is a spiritual and moral problem. New laws and more government give-away programs are not the answer. It’s a heart problem, and only God can change the human heart.
I’m disappointed that some of the President’s harshest critics about going to the church were clergy. They have publicly (to the media) criticized the President for walking to the church and for holding up the Bible. That’s unbelievable. They should be thanking him rather than criticizing him! They are nitpicking his gesture, also saying he should have prayed while he was there. So critical. Well, maybe they should invite him back and pray for him as he leads this country through a very difficult time in our history.
I call on all pastors, regardless of denomination, race, or political persuasion, to join hands and join hearts in praying for our nation, that God would give wisdom to our leaders—our mayors, our governors, our President Donald J. Trump, and also our law enforcement. The God of the Bible is our only hope.

How Robert Jeffress and Franklin Graham are Fluffers

When this situation with Christian nationalism is all over I plan to sit down and compose a missive of what I have learned about evangelicalism. But I remain stunned about how they have embraced violence even to the point of undermining the teaching and beliefs of God. What I am about to say next I predict will be one of my most controversial statements here at The Wondering Eagle. But the fact of the matter is that Christian nationalism has no bottom. Just when you think it can’t get any lower it does. And in trying to analyze and describe it a thought popped in my head as I was reading that Atlantic magazine article. Its also a term that is used in the urban dictionary. So with that said let me proceed.

If a Tiananmen Square Protest was Put Down in Washington, D.C. Robert Jeffress and Franklin Graham Would Most Likely Still Approve

As being fluffers to what length would they go? How far will they go? Its this blog’s belief in their drunken pursuit of power they will defend the president for anything and everything. Just as a meth addict gets his high, people like Franklin Graham and Robert Jeffress will get their high from being close to political power. To make my point let me ask a question. Who here remembers the June 4, 1989 Tiananman Square protests that were brutally put down by the Chinese People’s Liberation Army. In their pursuit of power if such an act of violence happened in the United States, I would predict that Franklin Graham and Robert Jeffress would be excited and they would defend the president – even if there was a large loss of life in the thousands. If such an event happened Robert Jeffress and Franklin Graham would be fluffers continuing to arouse the president.

I have pushed back from evangelicalism but I am wondering when will many evangelicals consider Franklin Graham and Robert Jeffress to be spiritually lost? Why do people consider them to be Christians is something that honestly astounds me. In this case how and why do some people even respect them? Is it cognitive dissonance inside evangelicalism? Now here is where normal every day evangelicals are indicted in the view of this blog. How many know what Operation Christmas Child is? How many know what Samaritans Purse is? How many churches do Operation Christmas Child? Almost everyone that I once called home support and use those programs. The support regular evangelicals are providing Franklin Graham’s ministries is helping to keep him afloat. This needs to be talked about as well as a part of evangelical culture.  I would never call regular evangelicals fluffers. That would be inappropriate and warped. That is a special term that this blog will use for court evangelicals Robert Jeffress and Franklin Graham and others like them. But by continuing to support such ministries evangelicals become part of the problem.

18 thoughts on “Considering Christian Nationalism. How Franklin Graham and Robert Jeffress Are Nothing But Fluffers”