This post is a reflection on the Los Angeles riots in 1992 and the Rodney King beating. As a white person my views changed with time and I came to realize how the Rodney King beating was racially unjust. Also with me being the first can we have a discussion on white privilege? From being in evangelical churches to moving and living in different parts of the country. This post is how I came to realize that white privilege exists.

“An individual has not started living until he can rise above the narrow confines of his individualistic concerns to the broader concerns of all humanity.” 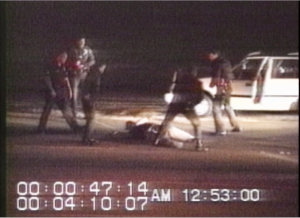 Rodney King being beaten by the Los Angeles Police on March 3, 1991. Screenshot from YouTube.

At the beginning of March in 1991 I was in the U.C.L.A Medical Center for some surgery. I have a history of asthma and allergies and along with that came sinus problems. My parents wanted my to have sinus surgery to clean up my sinus issues, my doctor in Fresno was also recommending it. While I was in Los Angeles on the first weekend of March something happened that would change the city’s  history. A black motorist by the name of Rodney King was pulled over the Los Angeles Police and while he was on the ground he was beaten by four police officers. If I remember correctly it was on the bottom left hand page of the front page of the Los Angeles Times. And the issue of police brutality and racial injustice became very hot in California. I’m white and when this incident happened my thinking was that if Rodney King obeyed the laws then he would not have gotten beaten. I also interacted with some minorities through sports that I played and they had a very different take. They claimed that an African-American was targeted by the police, and this this happens regularly with the police. This was just caught because it was video-taped.  I disagreed and had sympathy for the police officers thinking they have a hard job and that they should be respected. As a white person I sympathized with the Los Angeles Police. In time I would realize I was wrong and I am embarrassed to say this, but it needs to be discussed.

By now you know the story of what happened. On April 29, 1992 a jury in Simi Valley, California acquitted four Los Angeles Police Officers of the charges of assault and three out of the four of  excessive use of force. The jury was mostly white and sympathized with the Los Angeles Police Department with their action. That afternoon after the verdicts were announced the riots began in South Central Los Angeles at the corner of 71st and Normandie. At the time I lived in Fresno in the San Joaquin Valley of California and I had some family that lived in the Claremont-Pomona area outside Los Angeles. Most of the violence was centered in the Los Angeles area. I recall being in my home in Fresno and watching the violence on television. There was the beating of a white truck driver Reginald Denny, the city coming to a halt and fires being lit. There were images of Korean-Americans armed with weapons shooting as they tried to protect their businesses. There was the image of California Governor Pete Wilson declaring a state of emergency and signing it on the hood of a police car if I remember correctly.  One of my friends from high school attended the University of Southern California and was on the campus when the riots took place. He told me that you could see the smoke from the fires. My reaction to the violence at the time was influenced by the people who I listened to who spoke about the lawlessness, how it was right for the jury to acquit the officers and more. The Los Angeles Police Officers were eventually retried under federal charges and two were convicted out of the four.

As time passed on I have slowly come to realize the injustice that took place in Los Angeles. It wasn’t a sudden a-ha, but a slow, gradual process of realizing the issues when it came to racial injustice. In time I realized that I was wrong and Rodney King was wronged and treated too rough. I hate to say this but there are times that some stray animals can be treated better at times. They can be treated more humanely. This change in my thinking came as my life changed. It occurred as I had different experiences. It came as I realized that life is not as black and white as I once thought. It came as I watched people I know have different experiences in life.  Moving and living in different parts of the United States also expanded my thinking. And I also worked to expand my friendships. We have a lot of issues in the United States and we have a large problem with racial injustice which we need to acknowledge and have a frank discussion about. In this writer’s view the first area that we can discuss is that of white privilege,

How My Thinking on White Privilege Changed

White privilege is hard to define. Here is a definition I like which I think captures it well. White privilege is the reality that a white person’s whiteness has come—and continues to come—with an array of benefits and advantages not shared by many people of color. It doesn’t mean that I, as a white person, don’t work hard (I do) or that I haven’t suffered (well, I have known struggle), but simply that I receive help, often unacknowledged assistance, because I am white.  Before I continue make sure you read the previously linked article on white privilege. What has taught me that white privilege exists? The following is what brought the issue to the forefront.

Let’s Start a Discussion on Race By Acknowledging White Privilege

So here is my request. As we watch many cities experience racial unrest can we begin to discuss white privilege? This is not a liberal or conservative issue. Its not a Christian or atheist issues. Its not about redistributing wealth or more. Its about acknowledging that some of us – myself included – have benefited from white privilege. Can we change the conversation and start to discuss this and allow African-Americans the ability to speak up and speak their mind. You will hear different perspectives on racism or slavery and economic injustice. This is a conversation that we can not afford to delay. Its long overdue. I know this post may be hard for some to read. Others will dismiss it. But this post is not about nagging or playing down anyone’s importance. But in our culture, and in religion this is a topic that needs to happen. Can we start? In reflecting on this topic I will step forward with this post and bring forward my thoughts on white privilege.