In mid February 2020 I was in New York City visiting on a personal trip. Little did I know that I was on the edge of the storm of a pandemic that would hit New York City hard. This is a reflection on what is normal versus what is playing out right now. This post will allow you to see two sides of the city in a crisis.

“The only normal people are the ones you don’t know very well.“

Times Square in the morning.

The other day I wrote about the COVID-19 pandemic and how it is impacting San Francisco, California. You can read that post in, “As a Native Californian I am Deeply Troubled by how COVID-19 is Impacting San Francisco, California.” Today I want to reflect on what I am seeing in the news and the time spent in New York City. I visited New York in mid February 2020 on a personal basis. It was encouraged by a grief counselor as I am processing my parent’s deaths. I will write more about the trip another time. When I was in New York I was overwhelmed by all the people that were in the city. Times Square was crowded and full of people.

The video I posted above I did for two reasons. One is that it describes and shows how the city is dealing with the COVID-19 pandemic. Second is that I know the area the video shows. For example in the video at 2:05 you will see a restaurant called Bond 45. I ate there before seeing Phantom of the Opera. Next to Bond 45 is the Edison Hotel which is where I stayed in New York City. So the area that the car travels through I walked over and enjoyed. Contrasting what I saw in that video gave me chills. It is not the New York City or Times Square that I know. When you watch the video look at some of the pictures below for perspective. The pictures below show what is normal where as the video shows the effects of the pandemic. 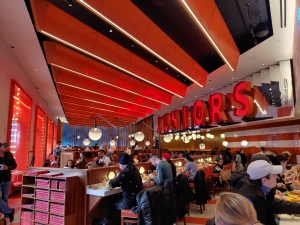 Juniors which is a staple of Times Square and known for their cheesecake. Busy with breakfast. 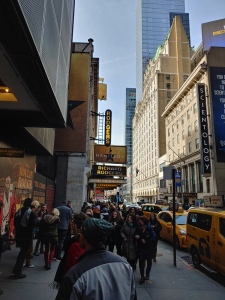 The line for Hamilton. Compare this with what you see in the video. 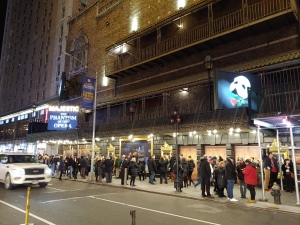 Phantom of the Opera and the line to get in. 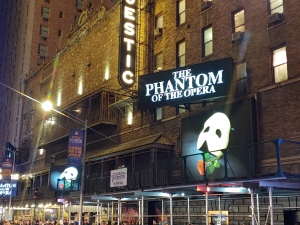 Phantom of the Opera again.

A few blocks away the Radio City Music Hall.

Being on the Cusp of a Pandemic and the Breakout of COVID-19 in Washington, D.C. and its Ties to New York City in Early March 2020

The Seattle, Washington area started to experience COVID-19 at a nursing home in late February of 2020. Before everything took off I was in New York City from February 14 to February 18, 2020. In looking back at what has gone on I was in the city when it was at the edge of the pandemic. Who knew what was going to take off in two or three weeks? That gives me chills. But you know what also gives me pause? In the Washington Post in early March it explained that those in the Washington, D.C. area who contracted COVID-19 did so in New York City. The stories I read dealt with people who visited and stayed in Times Square. That gave me a lot to think about. When I was there the window for the city to be safe was closing. In about two weeks it would be gone. There is no way I could have known what will hit. But seeing all these pictures and videos of a deserted Times Square and parts of New York City gives me pause. I plan to look at this from another angle in a few days. The purpose of this post is to compare and contrast the two situations.