As universities closed in the Commonwealth of Virginia due to COVID-19, Liberty University remains open and students were allowed to return. An English professor wrote an article in the media pleading for the Board to intervene. Meanwhile the local Lynchburg government is not happy as they were apparently misled by Jerry Falwell Jr himself. In this reckless decision that places many people at risk this school should also load up on body bags as well for use during a pandemic.

“The wise man does at once what the fool does finally.“

If we confess our sins, he is faithful and just and will forgive us our sins and purify us from all unrighteousness. 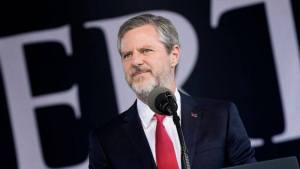 Here in the Commonwealth of Virginia all universities have closed their buildings and had staff telework from home. In Fairfax  in the D.C. area George Mason University explained its closure here. Christopher Newport University in Newport News explained how it has closed and gave instructions. In the capitol of Richmond,  Virginia Commonwealth University explained how it shifted online which you can read here. Other schools including James Madison in Harrisonburg, the University of Virginia in Charlottesville and Virginia Tech in Blacksburg have all followed suit. All universities have decided to follow Virginia Department of Health guidelines and the Centers for Disease Control when it comes to the COVID-19. All in Virginia except one university, however which has rejected the safety guidelines. And of course Liberty University as led by Jerry Falwell Jr.

Marybeth Davis Baggett is a faculty member at Liberty University. Her focus is English and literature and she teaches science fiction, dystopia literature and more.  Disturbed by the fact that Liberty is remaining open she wrote an op-ed to the Board of Liberty University asking them to intervene in the situation. Dorms remain open and faculty is expected to show up to work. Here is how she wrote about it in the Religion News Service.

This is as the window for “flattening the curve” of the outbreak is closing.

This foolhardy decision tracks Falwell’s conspiratorial thinking about COVID-19 and smacks of defiance.

He has repeatedly made it clear that he canceled residential classes for legal, not moral, reasons. In fact, his public comments on the pandemic have manifested bravado, self-congratulation and callousness in the extreme, as, even this week on the Todd Starnes radio show, he spewed far-fetched, unsubstantiated and misleading information about the coronavirus outbreak.

For one charged with leading a Christian institution of higher learning, these are troubling qualities, fundamentally at odds with both Christian faith convictions and an academic mindset. For a leader dealing with a situation of such magnitude, they are outright terrifying.

By continuing to flout the danger of this novel coronavirus, Falwell also encourages reckless behavior in the university’s students. The kicker is, he points to the droves of students coming back to live in the dorms as evidence of his wise decision to keep the campus open.

Falwell cavalierly assumes no responsibility for at least enabling and at most incentivizing the students’ decision to return. Rather than provide the steady leadership needed at this sober time, Falwell has chosen to indulge and endanger the students, as he did last Friday in his convocation message.

“You guys paid to be here, you wanted to be on campus,” he told them. “And I want to give you what you paid for.”

He did warn students to stay away from people who were at risk from COVID-19 and say that the school needed to be “sensitive to people with respiratory problems and older people.”

Earlier in the week, Falwell told Starnes that most of the students would come back to campus. He and the radio host laughed off reports of college students partying in large groups on spring break.

“When we were young, we thought we were invincible,” Falwell said. “That’s just human nature. You’re not going to change that.”

But shouldn’t a university president at least try to inculcate more other-regarding attitudes? To further demonstrate how unfit he is for this moment, Falwell plays off the spring breakers’ presumption and insolence as harmless.

According to Marybeth Braggert behind the scenes many faculty members have raised their concerns but are scared of speaking up out of what it will do to their job. You can read the article in the Religion News Service and also the Washington Post.

The fact that Liberty is staying open has received some strong criticism by local city leaders of Lynchburg, Virginia. In the Daily Beast it was reported that Lynchburg City Manager Bonnie Svrcek said that Falwell misled her and stated that she was led to believe that students would not be called back and that the dorms would be closed. Parents of Liberty University students started to call Lynchburg authorities and complain about this decision threatening people’s health. This past week 1,100 Liberty students came back to campus as the pandemic in Virginia is growing with currently 391 people diagnosed with COVID-19. Lynchburg Mayor Treney Tweedy gave a statement at a city council meeting calling the decision to let students return as being “reckless.” She also said, “I am concerned for the students, faculty and employees at Liberty University, and I am also very concerned for the residents of the Lynchburg community.”  In a tweet a reporter from the local newspaper said that Virginia Governor Ralph Northam is asking Liberty to follow other Virginia universities.

Virginia Gov. Ralph Northam is asking Liberty University to reconsider the decision to invite students back to campus. “I would suggest that President Falwell look to the actions of the leaders of Virginia’s flagship universities.”

Meanwhile Jerry Falwell Jr attacked his Liberty English professor and stated that the hype is overblown. That they have signs up and are complying but that they still are staying open for a large number of students. If you want to read more you can do so in the following articles.

Jerry Falwell Sr used to have a saying that he told other people in the context of Liberty University. He said, “If it’s Christian it should be better.” If that holds true then Liberty should get better body bags that can be used on their students as the pandemic moves through campus. The body bags should be classier then what you would find in the county morgue. This policy by Jerry Falwell Jr is beyond reckless, in that it is dangerous. It actually shows a contempt for life and any claims of Jerry Falwell Jr being pro-life hold no merit especially as he puts older, and people with compromised immune systems at risk. Those who attend Liberty even as students who have gone through chemotherapy, have asthma, chronic bronchitis, bright’s disease and more are all being put at risk. Why is he doing this? Well in the news the other day President Trump called for social distancing to end and for all the churches to be packed on Easter. You can read about it here.  Jerry Falwell Jr has made it quite clear who the Lamb of God is these days. Who does Jerry Falwell Jr believe to the incarnation? The Word became Flesh? It is President Trump. Re-opening Liberty and allowing students to came back is about Falwell’s effort to worship his personal Lord and Savior – Donald Trump. Normally its Jerry Falwell Jr who prostrates himself in front of President Trump. However, this time in the early stages of a pandemic Falwell wants to make an offering. He wants to offer as a sacrifice the body of a dead Liberty student  to show his absolute devotion to his Lord – the current American president. My fear is that there will be a lot of students at Liberty who will be dead because of this decision. And the tragedy is that when it happens most if not all could have been prevented. And this also poses a risk to the community of Lynchburg as well.

This blog has long remain baffled as to why Liberty University has the following that it does. A while back I asked the question if Liberty one day will become the next Ruby Ridge or Waco. You can read more about that in, “Liberty University Opens a “State-of-the-Art” Gun Range. Given how some Evangelicals can be Intensely Paranoid Could a Waco or Ruby Ridge Situation Develop One Day in Lynchburg, Virginia?”  The university is toxic, this decision only shows how bad it is there. Those that live in the shadow of Liberty here on the East Coast have long had to deal with this school and seen it influence churches in an unhealthy way. Before I became one of the dones, the last church I attended I was in a small group and listened to my Bible study leader praise Liberty and talk about how much he loved it. It baffled me. Looking at the problems that are coming out of Liberty and seeing these issues was troubling.

As I wind this post down this is my comments to any Liberty parents who may read this post. For the health of you children you need to remove them from Liberty. There are many other Christians schools they can be placed in if that is the path you want to take. You have schools like Fuller, Trinity International University and countless others that can be used. That so what you need to do. My hope is that this will impress on you to consider other locations for education. But Liberty is toxic. Its time to cut and run. Christians need to confront this issue and vote with their feet.

4 thoughts on “Jerry Falwell Jr is Keeping Liberty University Open as Local Officials and Marybeth Davis Baggett Plead Otherwise. Remember if its Christian It Must Be Better. That Applies to the Bodybags Liberty Will Use During a Pandemic”