In the National Catholic Reporter the other day Patrick Reardon wrote about finding God in the pain of his brother’s suicide. This blog expresses its deepest sympathy at his loss. However, this blog is also concerned about evangelical thinking bleeding into Catholicism. The last thing Catholicism needs is the evangelical modus operandi and thought process and approach to life. I say this in a sensitive manner in regards to your brother’s suicide.

“All deaths are sudden, no matter how gradual the dying may be.”

Even though I walk through the darkest valley,[d]
I fear no evil;
for you are with me;
your rod and your staff—
they comfort me. 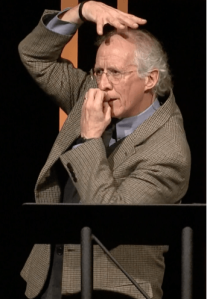 This blog subscribes to a lot of sources that I read and consume in my search to find material for this blog. Likewise I also have a wide net in subscribing to stuff from evangelicalism to atheism to Catholicism. The other day I saw something in the National Catholic Reporter that troubled me and I put this on the pile of items to write about. The National Catholic Reporter article I am using is called, “I found God in the pain of my brother’s suicide.”

Patrick Reardon on Finding God Through Your Brother’s Suicide

The National Catholic Reporter ran an article by a Chicago writer called Patrick Reardon. In the article he writes about his brother’s suicide and of the challenges and pain in his brother’s life. His brother could be quite argumentative on religion and politics. But he mellowed as he aged. In his 60’s he had back surgery that left him weak. His brother David upon needing four more surgeries after a difficult recovery ended his own life. In the pain of his brother’s suicide he claimed that he found God. Here is part of his article below.

And, in that pain, I saw — I realized — that God was there. I’m not talking about a voice from heaven or a vision or a cooling breeze. I’m talking that God was there, somehow, in the ripped and jagged, raw agony of facing these unfaceable experiences.

The God who was there with me as I moved deep and deeper into this pain wasn’t the Jesus who called the little children to him, or who preached the Beatitudes. It was the Jesus of the cross, and the God of two dark, bleak books of the Old Testament — Ecclesiastes and Job.

Modern translators tell us that “vanity” isn’t exactly the right word, and some versions have the opening words as “Everything is meaningless” or “Pointless! Pointless!” Famed translator of the Hebrew Bible Robert Alter renders it: “Merest breath … merest breath. All is mere breath,” explaining that “mere breath” isn’t the taking in of life-giving air, but the exhalation of the unusable vapor, the small quickly disappearing white cloud that is visible when you breathe out on a very cold day.

My life is as substantial as a cloud of vapor. David’s life was. Here today, and then gone.

So why is Ecclesiastes, grim and stark as it is, even in the Bible? From the pain of David’s death and the pain of my looking, for the first time in my life, full-face at many anguishing things, I have come to think that this is where God is and demands that I go — that I leap into this unknown. That despite the desolateness of life, I embrace the pain as, somehow, a route to faith and hope, a highway to God.

The only alternative for me is to run from pain and accept the desolateness of life. I don’t want to do that.”

If you would like to read the rest of the article you can do so right here.

Please Can We Keep Evangelicalism Out of Catholicism?

When I was reading the National Catholic Reporter I was stunned to see that article in the publication. The article reminded and gave me flash backs of the Neo-Calvinist theologian John Piper. This blog expresses deep sympathy to Patrick Reardon over his loss of his brother. But I have to state that this approach reminds me not of Catholicism but of Neo-Calvinism.  Why not grieve the loss in itself? Why try and find a way to explain it. And please understand I am not trying to be insensitive on this issue. Death is sensitive and suicide even more so. It appears to me as if in this article the bridge from Catholicism to Neo-Calvinist fundamentalism is being crossed. Parts of this article reminds me of what John Piper has taught and preached in the past. Is it possible to keep Catholicism separate from the issues in evangelicalism. The blurring of the lines crates problems and leaves for confusion. If someone is trying to get away from the fundamentalism of someone like John Piper this leaves me dead in my tracks and asking questions of why go to Catholicism if this is the thinking that exists there as well. As a faith movement evangelicalism can have challenges and problems This blog regularly looks at them. But my plea is can we leave the fundamentalism – of trying to find an answer for everything and a meaning for everything out of Catholicism?