Christian Nationalists are advancing a claim that God placed Donald Trump in power and that there is no free will. In this debate a Mormon pushed back hard and defended the belief of free will. This post would like to ask the question for those evangelicals who are blindly stating that God placed Trump in power, could Mormonism be a healthier alternative for them? Could they learn more about the Gospel inside Mormonism? Maybe some need to consider that issue.

“There is a cult of ignorance in the United States, and there has always been. The strain of anti-intellectualism has been a constant thread winding its way through our political and cultural life, nurtured by the false notion that democracy means that my ignorance is just as good as your knowledge.”

Give thanks to the Lord, for he is good. His love endures forever. 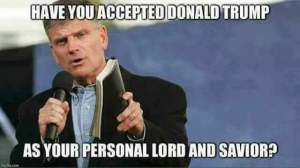 The other day on Twitter I saw an argument being made by a Christian Nationalist who tried to explain why God chose Donald Trump. Then later on there was also a response from a Mormon which raised my eyebrows. I lifted a couple of tweets and put them down below. Read what Erick Erickson who embraces the culture wars at The Resurgent says. And then study Evan McMullin’s response to him.

This argument supposes that humankind has neither free will, nor accountability, nor purpose. It suggests that God is as much the source of light as of darkness, and that our sins are His. It's the root fallacy at the center of the right's moral corrosion and nihilism today. https://t.co/2h8GGxleTU

"…God is light, and in him is no darkness at all…If we say that we have no sin, we deceive ourselves, and the truth is not in us." -1 John 1:5-8 pic.twitter.com/xbqiLgA4uw

God also gave us Hitler, Mussolini, Emperor Hirohito, etc. Will any of these pundits, that are so quick to raise Trump to the level of the evangelical chosen one, give God credit for those "leaders" rise to power as well. https://t.co/1887I0K0zU

Mormonism is officially known as the Church of Jesus Christ of Latter-day Saints. It was founded by Joseph Smith on April 6, 1830. Mormons will tell you that Mormonism is to Christianity what Christianity is to Judaism. It is not considered orthodox Christianity. Mormon theology rejects the trinity and claims that people were spirits before they were born. Heaven has three levels to it and they also believe that male Mormons can become Gods after death and inherit their own plant. They have four official texts the King James Version of the Bible, The Pearl of Great Price, The Book of Mormon and Doctrine and Covenants. The Book of Mormon is about the Israelites coming to South America and Jesus appearing to the South Americans. The religion started when an angel named Moroni appeared to Joseph Smith in update New York and told him to reject all the current churches at the time. Smith was to re-establish Christianity.  The Mormons also will teach you that after the last apostle died the Christian church entered into a state of apostasy until 1830 in upstate New York with the Gospel being re-established. This writer explored Mormonism in college and in the archives of this blog there are a number of posts that you can read to learn more.

Christian Nationalism as Advocated by the Erick Erickson’s, Franklin Graham’s and James Dobsons of the World

Starting in 2016 many evangelicals wrapped themselves around Donald Trump and became strong supporters. This blog wants to differentiate and state that those who are Calvinist rejected the phenomenon mostly as they don’t believe in the culture wars.  Calvinists are not about winning a Supreme Court seat, but church planting and expository preaching. In contrast, many of the Christian Nationalists are putting forward a claim that God chose Donald Trump for the Presidency of the United States. Erick Erickson who is involved in the culture wars and writes about evangelical issues as well as political causes made that claim in the tweet you can see above. The claim is that God chose Donald Trump and that it is confirmed by scripture. God intentionally sends plagues and can create rivers of blood. Other Christian Nationalists such as Eric Metaxas, Robert Jeffress, James Dobson and Franklin Graham would also get on this bandwagon. They would say it in different ways though. For example Franklin Graham in June of 2019 said that God was behind the election of Donald Trump, you can read that claim here. Southern Baptist pastor Robert Jeffress also has claimed that God helped engineer the election of Donald Trump. You can read about that here.

How the Mormon Understands Christianity Better than the Evangelical Christians

Evan McMullin is a Mormon who did an LDS mission to Brazil and graduated from Brigham Young University in Provo, Utah. He worked at the Central Intelligence Agency from 2001 until 2010. When I was on Twitter the other day I saw Erick Erickson’s comment and ignored it. However, later on when I saw that Evan McMullin responded to it and took it on, I was impressed with what was stated. In this case it is the Mormon who understands the Gospel better and can respond to the evangelical rot and corruption. Consider the Mormon has a better understanding of the Christian topic of free will. People are free to choose even bad leaders. In addition he also points out that evil does not come from God by even quoting John 1:5-8. When I saw Evan McMullin pushing back on the theology and correcting the evangelical Christian on basic theology I realized that in this situation the Mormons actually understand the Gospel better then the evangelical Christians.

The irony of this is that many evangelicals would call Mormonism a cult. Maybe they could say that in the past but can they state that today when many culture war evangelicals support and blindly help prop up a personality cult?  When one considers what is said about God picking leadership that can’t be changed that raises a whole host of questions like the following. Did God put Pol Pot into power in Cambodia and have 1.7 million people killed in Cambodia from 1975 until 1979? What about Adolf Hitler? Did God place Hitler at the head of Germany and instigate World War II? Is God responsible for the deaths of 6 million Jews and another 5 million non-Jews but others who ran afoul of the Nazi regime? Last month I suggested an idea that I would like to resurrect here. When you see some of the personalities in evangelicalism like Mark Driscoll or James MacDonald are evangelicals following another personality cult because they are accustomed to it? Is following Donald Trump any different than following James MacDonald or Mark Driscoll? This blog has observed over the course of time how some people go from one cult to another and do not seem to learn from their past mistakes. You can read more about this in, “Considering Authoritarianism in Evangelicalism. Did Individuals Like Mark Driscoll in Seattle Pave the way for Evangelicals to Follow Donald Trump?”

So this brings us back to the issue of Mormonism and the evangelical Christians engagement in believing that God places in power any leader regardless. Evan McMullin has a better understanding in this situation of the Gospel than the Evangelical Christian. This blog would like to raise the question, can Mormonism be a healthier alternative for those evangelicals in the Trump personality cult? Would some of those Christians learn more about the Gospel by engaging and possibly looking into Mormonism? And this blog would suggest that yes that can perhaps be an alternative. So if any of you out there who engage in the culture wars and are Trumpists want to learn more about free will you can visit the website for the Church of Jesus Christ of Latter-day Saints right here.

9 thoughts on “Considering Christian Nationalism: When the Mormon Understands the Gospel Better Than the Evangelical Christian”