The EFCA’s Eastern District conference began with candidates up for their ordination exam. Benjamin Vrbicek who leads Community Evangelical Free Church in Harrisburg, Pennsylvania was the first candidate up this morning. After a long morning Benjamin passed. This blog post briefly looks at pastoral ordination inside the EFCA.

“Exams test your memory, life tests your learning; others will test your patience.”

It is the Lord your God you must follow, and him you must revere. Keep his commands and obey him; serve him and hold fast to him. 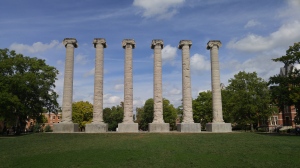 Columns at the University of Missouri at Columbia

The genius of Mel Brooks

The Eastern District Conference began on October 8, 2019 at Faith Church in Allentown, Pennsylvania. The conference actually started with an ordination council on Tuesday morning. On September 24, 2019 the Eastern District sent out an email encouraging people to attend and even promoting the candidacy of Benjamin Vrbicek. In the email it was stated as the following. “For those interested in credentialing, you are invited to come out and watch an ordination council on Tuesday morning before the conference begins. We have a great candidate (Benjamin Vrbicek from Community EFC, Harrisburg) and I know it will be a good time to see the interview process.” No doubt for Benjamin Vrbicek that probably put a little extra stress on him especially as that was how the conference began.

This blog has written about Benjamin Vrbick before. The former athlete from the University of Missouri (hence the picture up top) is one of the most prolific writers for The Gospel Coalition, in the EFCA’s Eastern District. You can read a biography of the Community Evangelical Free Church Pastor from Harrisburg in, “Brick Lane Community Church Joins The Gospel Coalition, and Challenging a Misleading Statement from Steve Estes Church.” Benjamin at his blog also wrote a tender post about friendship that I explored as well in, “Benjamin Vrbicek of Community Evangelical Free Church in Harrisburg, Pennsylvania Writes a Tender Blog Post on Friendship.”

The ordination process can be read here. At Benjamin Vrbicek’s blog he wrote about the process in a general sense. The process takes at least three years. It starts with writing a 20 page paper that agrees with the EFCA Statement of Faith and then defend your theology in an oral examination for 2 hours. The exam is run by the district’s credentialing council which consists of about a dozen EFCA pastors from that district. The second step is to serve in an EFCA ministry for three years and do well in that role. The final step is to do a repeat of the first step, except everything is doubled. The paper is now 40 pages and the oral exam is 4 hours.

At his blog Benjamin prepared for his oral examination by sharing his ordination paper. I have read a couple of posts and its pretty heavy to process. Not all of the 11 posts are up but you can read them below. As Benjamin finishes his posts I will post them below for people to read.

I passed! 👇🏼 Thanks for the prayers. https://t.co/NQzKYyNKg6

Benjamin went through the 4 hour oral examination this morning. In attendance were his parents, daughter and at least two dozen members from Community Evangelical Free Church in Harrisburg. The distance from Harrisburg to Allentown is about 90 miles. On social media after it was all completed Benjamin announced that he passed. Hopefully he will write more about the ordination at his blog. It would be interesting to hear about the questions that were asked. What came up in regards to modern culture, ethics, and more. There definitely can be a number of blog posts that can be explored at his blog Fan and Flame. Regardless this blog wishes Benjamin Vrbicek well and looks forward to following his career as he works in local ministry in Harrisburg, Pennsylvania and the Eastern District of the EFCA. Before completing this post I inserted Benjamin’s interview on the Pastor Writer below to learn more about him.

3 thoughts on “Benjamin Vrbicek of Community Evangelical Free Church in Harrisburg, Pennsylvania Passes his Ordination Exam as an EFCA Pastor in the Eastern District”