How should the Great Commission Collective (GCC) be viewed? Is the GCC just an extension of Harvest Bible Chapel? The Wondering Eagle believes that to be the case and is looking for stories about the GCC from Harvest Bible Chapel North Indy to other GCC churches. This aspect of the GCC needs to be investigated so let’s start to look at this organization.

“No advance in wealth, no softening of manners, no reform or revolution has ever brought human equality a millimeter nearer.”

“Sometimes the first duty of intelligent men is the restatement of the obvious.”

After John was put in prison, Jesus went into Galilee, proclaiming the good news of God. 15 “The time has come,” he said. “The kingdom of God has come near. Repent and believe the good news!”

I want to discuss a quasi nation-state that exists. Its roots and genesis are from the church planting arm of Harvest Bible Chapel, which is known as Harvest Bible Fellowship. Its a state that still has a reverent admiration for James MacDonald in many ways or the MacDonald sons of Landon and Luke. It can be an oppressive state with the Dear Leader still referred to in affectionate terms in closed door discussions. In this system people still fall in line and transparency does not exist. Kool aid is abundant and is liberally dispersed. And while this quasi nation-state isn’t shooting off missiles they are doing something just as dangerous – they are wanting to launch church plants on the East Coast and the Midwest of the United States.  The organization I am referring to is the Great Commission Collective (GCC) as led by Brian White and which has Dave Harvey as its new President.

Jeff Hoenshell and a Comment at Harvest Bible Chapel Fairfax

As this blog geared up to write about the Harvest Bible Chapel scandal in Chicago I set out to attend a Harvest Bible Chapel to observe, pay attention and to study it. There are two in the northern Virginia area of Washington, D.C. And I decided to attend the church plant in Fairfax, Virginia. You can read that post in, “An Experience with Harvest Bible Chapel Fairfax. Plus how is James MacDonald Viewed by the Great Commission Collective?” After the service I spoke briefly with Jeff Hoenshell who is a very high energy individual. He was walking out of the hallway when he introduced himself to me. When I raised the Harvest Bible Chapel situation he stressed that the Great Commission Collective was different. Then he said that when he was at Moody he had either Luke or Landon MacDonald as his RA and he said positive things about  one of the MacDonald sons. That bothered me and hung with me as I left. It reminded me of the Sovereign Grace Ministries scandal where the person said “but my church is different” as the scandal tore through the organization. This left me with the impression that there are other Harvest churches in the GCC that have a favorable impression on the MacDonalds.

One of the ongoing issues that still has not been resolved are the ethical issues with Garrett Higbee. Garrett Higbee violated a number of ethics rules when he spied for James MacDonald in Harvest Bible Chapel in Chicago. Garrett is doubling down and Brian White is playing dumb in a lot of ways but the questions still remain. If there are other stories about Garrett Higbee or Soul Care of even Twelve Stones this blog will be happy to tell them. You can read more about Garrett Higbee in the following posts: 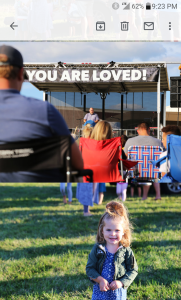 The other day I saw something that generated my interest and reminded me of and old post you can read about in, “You are Loved! Examining Propaganda of the Democratic Peoples Republic of Harvest Bible Chapel.” The picture above is from Harvest Bible Chapel North Indy which held an outdoor service on August 24, 2019. When I was studying it I noticed state propaganda that would impress George Orwell. Up above you see Brian White on stage preaching or talking and what I would say is the official theme of Harvest Bible Chapel – You are Loved! on proud display. Can’t have an outdoor event and not have kool aid. In this case Brian White will gladly provide the Kool Aid. That picture left me with a question, how healthy is Harvest Bible Chapel North Indy? How healthy is the culture and how is it different or is it different from Harvest Bible Chapel. Its DNA I would propose goes back to James MacDonald and how the organization is established. But these issues hang over the GCC and they need to be addressed.

The Wondering Eagle believes that the GCC needs analysis and investigation. This blog is putting a call for stories by former members who were involved in GCC churches. If the issues are child sex abuse, Soul Care being used to cover up crime, financial issues, abuse of power by leadership or situation that show James MacDonald still having influence this blog would like to report and write about it. There is a lot to do with the GCC  so let’s get started, my email is wonderingeagle261@gmail.com