During the border crisis on the United States and Mexico Christian artist Nicole Nordeman wrote an open letter to Franklin Graham. In it she pleads with Franklin to have Donald Trump intervene in the situation and help neglected children. I was surprised to see it in the newspaper and wanted to do a brief post.

“Rev. Graham, you are in a unique position to do more than watch. You can intervene in the border emergency. President Trump respects and listens to your counsel, and you have a demonstrated record of influence with the president.”

“The King will reply, ‘Truly I tell you, whatever you did for one of the least of these brothers and sisters of mine, you did for me.’ 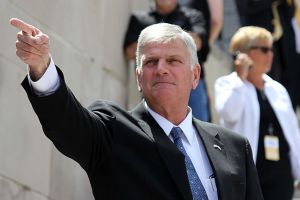 This is another item that is on my pile to write about. This impressed me and I was stunned to see it in The Washington Post on June 29, 2019. Nicole Nordeman, a well known evangelical Christian musician wrote an open letter to Franklin Graham. In it she draws attention to the border situation on the United States/Mexico border and the neglect of children. In her open letter to Franklin she asks him to ask Donald Trump to promptly address the situation. You can read the letter in the Washington Post here. But if you can’t access it I will insert it below.

Rev. Franklin Graham, I recently tweeted to you an offer to hand-deliver shoeboxes filled with toothbrushes, soap, socks and other hygiene items, clothing and toys to children on the border after reading reports about the abhorrent conditions in detention facilities.

For many years, I have helped my children select and joyfully squeeze items into a large shoebox that would be opened by an underprivileged boy or girl across the globe through Operation Christmas Child, a program by Samaritan’s Purse. Packing the shoeboxes afforded me some of the earliest conversations with my children about compassion, generosity, gratitude and privilege. Thank you for that.

I recognize that Operation Christmas Child has come under scrutiny because of criticism about proselytizingand comments by you, president and CEO of Samaritan’s Purse, about immigration, Muslims and politics, and it continues to have detractors. Regardless, Samaritan’s Purse shipped over 10 million shoeboxes in 2018 worldwide.

The organization also is involved in efforts to aid and rebuild U.S. communities affected by natural disasters. Samaritan’s Purse has commissioned teams of volunteer physicians, dentists and medical personnel to serve in the most critical and physically compromised communities in the world.

Now, the world is watching the humanitarian crisis at our southern border.

The reported horrific abuse and neglect of children in detention centers, and the dire and dangerous realities facing those arriving at the border, even to claim legal asylum, is nearly impossible to watch.

But watch we must because this is the moment in the biblical parable about the Good Samaritan — from which Samaritan’s Purse derives its name — in which Jesus asks us to reflect on our response to the defenseless and battered traveler by the roadside. Your organization notes on its website that it “travels the world’s highways looking for victims along the way. We are quick to bandage the wounds we see, but like the Samaritan, we don’t stop there. In addition to meeting immediate, emergency needs, we help these victims recover and get back on their feet.”

Rev. Graham, you are in a unique position to do more than watch. You can intervene in the border emergency. President Trump respects and listens to your counsel, and you have a demonstrated record of influence with the president.

For example, you said on the Christian Broadcasting Network in 2018 that the zero tolerance family separation policy at the border was “disgraceful” and that you did not support it. Thank you for saying that.

About a week later, Trump signed an executive order to withdraw the original policy. While Americans were largely opposed to this policy, I believe the opposition of most white evangelicals made a difference. And many white evangelicals look to your cues on such issues.

As an evangelist, you can communicate the heart of Christ for his desperate, marginalized and hopeless children to the one man who has the power to change policy.

Please ask Trump to sign the emergency legislation just passed by Congress that provides immediate aid and critical resources for children arriving unaccompanied at the border.

Ask the president to ensure that our asylum laws are respected, ensuring that no one with a credible fear of persecution is deported to danger. Ask the president to undo the recent policy shift that has already forced 15,000 people to wait for months in Mexico for their asylum opportunity in border cities. Resources are depleted, U.S. legal counsel is scarce, and children are at risk for traffickers.

Ask Trump to restore the recently cut assistance funds that help organizations — many of them faith-based like Samaritan’s Purse — to alleviate the root issues of poverty, violence and corruption that compel Central Americans to flee.

We must be able to get supplies and aid to people who desperately need them, and then to ensure they get a fair chance and receiving asylum in the U.S. Right now, we can’t.

Trump could change these policies instantly, and you could be the catalyst. Immediate policy change is the only way to address this growing crisis.

I’m sure it is nearly impossible for you imagine your grandchildren languishing in these abhorrent conditions. If I try and picture my kids there, I am simply overcome. How much more must Jesus weep over his own? This is not the time to lay blame or responsibility. This is the time to be a Christian.

My offer still stands to carry shoeboxes or more to children at the border. I have a feeling I would have a lot of company. It would be remarkable to see Samaritan’s Purse step up and lead this charge.

My plea to you is devoid of any political jargon, jabs or agenda. This can’t be about partisanship or blind allegiance. We must not hide behind our fragile egos and accusations. Not yours and not mine. How much more grief must we inflict on the heart of God?

Recently, I watched a tribute video you made several years ago when your father Billy Graham turned 99. The video included decades-old clips of his early crusades. I grew up watching those crusades on my grandma’s television set as she held her tattered and beloved Bible on her lap. There he was again, that familiar pulpit, that booming baritone coming, the ever-towering authority on grace. Billy Graham, who died in 2018, was still speaking to us.

“We live before a watching world,” your father said. “A world that is waiting to see if what we say is lived out in our lives.”

I am watching and praying that you would use your leadership in service of the most vulnerable in this moment, and on this, our sacred stretch of highway.