Zion Church of Kurten is an EFCA Church in Kurten, Texas. Recently they took down from their website a controversial discipleship program called The Milestone Program. The program used material from Sovereign Grace Ministries to disciple young adults. While grateful that this material was removed this blog hopes that Kurten Senior Pastor Aubrey Rodgers practiced critical thinking skills and discernment and not use material from a ministry known for covering up child sex abuse.

“Common sense is genius dressed in its working clothes.“

I keep my eyes always on the Lord.  With him at my right hand, I will not be shaken. 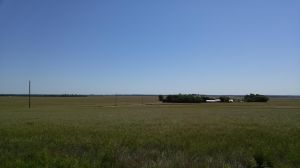 The plains of Kansas

There is so much to explore and write about in the EFCA in the Texas and Oklahoma District alone. This has been one of those posts that I have been meaning to get to for some time. The other day I noticed that a questionable program was removed from the Zion Church of Kurten’s webpage. It had been posted on the webpage from 2013 until 2018. It was a discipleship program in an EFCA church that used some material from C.J. Mahnaey’s Sovereign Grace Ministries. Before we get into it let’s examine the Zion Church of Kurten.

Aubrey Rodgers and the Zion Church of Kurten

This is an older church in the EFCA’s Texas and Oklahoma District. Zion Church of Kurten traces its history back to 1892 when it was founded by German immigrants. It became an evangelical and reformed church as led by Rev. Paul Vollbrecht. For many immigrants still new to the United States Zion became their home and their community. In 1902 Zion purchased the land upon which the church stands. It was remodeled several times over the years. A new facility was built in 2004. Zion’s history was with the Evangelical and Reformed Church which became the United Church of Christ. Zion finding the UCC to be too liberal disassociated itself from the organization. It then joined the Evangelical Free Church of America (EFCA) in 2007 and was received into the EFCA in 2008.

Aubrey Rogers is from San Antonio, Texas originally. Aubrey’s work in Christian ministry began in 1987. He worked in different capacities from preaching, to doing prison ministry as well as youth and family. Aubrey graduated from Abilene Christian University with a degree in Bible in the fall of 1997. Aubrey has been married to his wife since July 4, 2009 and is a proud father. As a pastor he came to Zion Church of Kurten in December of 2016. If you would like to listen to his testimony you can do so right here. Before moving forward Kurten is a small town of 398, and it is not far from Waco and College Station, Texas.

The Milestone Ministry as Steeped in Patriarchy, and Using Questionable Material From Sovereign Grace Ministries

On the Zion Church of Kurten’s website there was a program called the Milestone Ministry that was posted from 2013 until 2018. You won’t find it on the Zion website now, but I will have the links posted below. They were found by using the internet archives. The Milestone Ministry was a discipleship program by parents to grow their children in the Christian faith. The program had the following components to it.

When I saw this while researching and looking at the EFCA Texas and Oklahoma District I was disappointed to see this program. Sovereign Grace Ministries has been engulfed in scandal due to their efforts of covering up child sex abuse and other issues. But this blog noticed that the Milestone Program came down from the Zion Church of Kurten webpage recently. So the question I would like to ask is this…what happened? Did Aubrey Rodgers practice discernment? Did he read at Brent Detwiler’s blog about how Gary Ricucci was a defendant in the lawsuit against Sovereign Grace? Did Aubrey read at SGM Survivors about how inside Sovereign Grace pastors put the molestation of a child on the female and said that she wasn’t having enough sex with her husband? His sins were due to hers. Did the EFCA pastor at Zion read about how Sovereign Grace encouraged a wife to have more sex with her husband to the point of her getting sick so as he wouldn’t be “tempted” to be sexually attracted to his daughter? You can read the story of Taylor here.  Did Aubrey Rodgers read about the issues of child sex abuse inside Sovereign Grace Ministries that were documented and written about in The Washingtonian? Did he read about how Mahaney boasted of demanding sex from his pregnant wife when she was vomiting from morning sickness? Did Aubrey read about how C.J. Mahaney used a confession in a sex crime to blackmail his ministry partner Larry Tomczak? Did Audrey Rodgers read at Brent Detwiler’s blog about how C.J. Mahaney allegedly offered a hush fund to keep a Sovereign Grace pastor from New Jersey from joining the lawsuit against the corrupt ministry? Did he read about the issues with Carolyn Mahaney in that when Mahaney fled in scandal she defended him and later claimed he he was persecuted?

I hope Audrey Rodgers read some of those issues and that concerns about Sovereign Grace led to him pulling down the Milestone Program. As I write about the issues inside the EFCA I would love to see an EFCA pastor do the right thing and realize the issues and problems and scratch it from the church. The only way these kinds of issues are addressed is that churches like Zion Church of Kurten need to take the lead and reject such questionable ministries. If Audrey Rodgers practiced critical thinking skills then this blog will be impressed and encouraged. That is my hope and that is where I am going to leave this issue.