This is the notes and overview of the McLean Bible June 26, 2019 congregational meeting. This looks at the budget and other information. At the meeting Beach Week was discussed and news from different campuses shared. Plus McLean Bible prayed for a Catholic to become a Christian.

“Meetings are indispensable when you don’t want to do anything.”

“If you had to identify, in one word, the reason why the human race has not achieved, and never will achieve, its full potential, that word would be “meetings”.

The Lord is not slow in keeping his promise, as some understand slowness. Instead he is patient with you, not wanting anyone to perish, but everyone to come to repentance.

McLean Bible on a Sunday morning

The Wondering Eagle attended the McLean Bible congregational meeting which began at 7:30. This is an overview of what transpired in the meeting. At around 7:30 I scanned the auditorium and it appeared as if 100 to 125 people had attended at the Tysons Corner campus. Connected electronically were Montgomery County, Arlington, Loudoun, and Prince William.  The meeting was presided over by Elder Larry Cooper. Yes, this is the same Larry Cooper who stood from the same stage and in 2017 lied about McLean Bible joining the Southern Baptist Convention. This blog would like to know who failed to teach Larry ethics and shape his character? The Christian church or the United States Army? You can read more about Larry Cooper in, “According to Christianity Today McLean Bible Joined the Southern Baptist Convention in 2016; If True Why did Elder Larry Cooper Lie Before the September 21, 2017 Town Hall Meeting?“

When Larry spoke he addressed the campus numbers. By the way the congregational meeting handout is below. You should be able to click on it and study the information about McLean Bible. Larry Cooper said that membership is down slightly in 2019. In the past they used to count people who attended through the internet. Then they removed the internet campus numbers. Larry stressed that numbers are not important, but spiritual results are. McLean Bible wants to be a church that is more focused on spiritual results. Larry then started to discuss the finances of McLean. He wanted to emphasize that the mega church uses a box budget of $650.000. That box budget helps McLean reach its numbers and is applied to what is spent. Larry claimed that McLean is financially healthy.

Then it was announced that McLean Bible reached quorum  and they voted on the new members – 116 up to become members. The motion to nominate came Richard Norman. Larry boasted that McLean tightened its membership process and that it is not easy to become a member of David Platt’s church. They intentionally make it difficult to become an official part of the fellowship. Then they were to vote on the elders. Larry Cooper turned over the election to Tom McMahon. Up for re-election were Elders Larry Cooper, Wayne Fujito, and Patrick Lee. When the election was completed Larry joked about Tom being in the Navy and talked about the competition on the elder board as he walked up on the stage. Larry mentioned that the Military Ministry appreciation event  will be occurring next week for the July 4 holiday.

Getting back to the budget, Larry spoke about the box budget of $650,000.  In going over the numbers there were several items that were over-budgeted. That includes the following:

Then Larry turned the budget talks to the under budget. This is money that has not been fully spent. Issues that fell in this category include:

Larry Cooper stressed that they watch money carefully and want to make sure to pay attention to every dollar spent. They then read the minutes of the last meeting from March 27, 2019. Stated that McLean added 109 members to the church. And it was also stated in the minutes that the Box Budget started in December 2018 after its approval in the congregational meeting. The minutes were approved as read

The congregational meeting was turned over to David Platt at 8:00 and Platt expressed his gratitude for the elders and the job they do. David wanted to unpack some of the stories form the other campuses of McLean Bible, So Nate Reed came up and a number of people lined up to give praise to God. This is some of what I heard though in writing I also missed a couple.

David Platt led the meeting again. He talked about how The Rock students went to Beach Week in Myrtle Beach, South Carolina. A large number of teenagers were involved. David spoke about how many parents took time off from work to volunteer at Beach Week.  Nate Reed then introduced Riley Rosenburger who spoke. Riley is attending Virginia Tech in the fall. She wants to grow in her relationship with Christ and she is afraid of her faith being tested in Blacksburg, Virginia. At Beach Week Riley talked about an outreach that they did. They took out their cell phone and were told to text a message of how they wanted to express how much they were loved. The goal was to people to Christ. In Riley’s case a text bought a people a person to Christ. At Beach Week 44 students accepted Christ and 30 re-dedicated their life to Christ.

Then they shared a situation which I paid close attention to. There was a student who attended St. Johns, a Roman Catholic church in Ashburn, Virginia for six months. Then the  son attended McLean Bible. He found Christ at McLean and wanted his Catholic Dad to come to McLean. His father raised concerns about him coming to McLean as he was Catholic. At the congregation meeting McLean Bible was instructed to pray for this father that he would become a Christian and then come to McLean Bible. The way it was put is that he would discover the true Gospel and leave Catholicism behind.The name of the two individuals are Michael and Brian. In my chicken scratch notes I did not mark who is who. Now I poked around on the web and there is no St. Johns in Ashburn. There is a Saint John the Apostle in Leesburg, Virginia. Could that be it? David Platt prayed in the tradition of 1 Timothy 4:12. David also prayed for the girl attending Virginia Tech and that Christians would embrace purity. And take a delight in being pure.

Then David Platt turned the situation to an upcoming church plant that the New City Network is doing. Jefferson is trained as a church planter. He has been busy working non-stop for the cause of Christ and his wife’ s baby in an unknown at this point. They were told that the baby would not survive.  Over at McLean Bible Arlington Eric Saunders spoke. If you interested I wrote about Eric Saunders in the recent past in, “Eric Saunders Recent Message on Biblical Membership to McLean Bible Arlington Must be Rejected. Today’s Wondering Eagle Explains Why.” Saunders introduced their next missionary or Lindsay. She is scheduled to leave for Kenya on July 29, 2019. She got involved in McLean Bible Arlington four years ago. and did a short term mission in Kenya. She went back in 2016 and 2017. And she decided to go back full time in joining Brethren Ministries and work with special need kids in Kenya. David Platt then talked about how McLean Bible is playing a part in God’s global mission. It was also mentioned that there are two upcoming missions trips coming up. One to Kenya and the Dominican Republic.

Then from the Prince Williams campus Todd Peters the campus pastor introduced Philippe Prosper. He talked about how he prayed John 6:44 and how in a new house seven workers showed up. One was a father and son doing dry wall. Philippe asked him if he was ready for heaven in that he could die now. He said he was a believer and Philippe double checked  with him. The father talked about how he believed in God and at one point fell away and descended into alcoholism. It turned off his son to Christianity. He ended up sharing Christ with his son that morning on June 26, 2019. David asked the congregation are you praying every morning for an opportunity? Then the meeting went to Nate the campus pastor from Tysons Corner. He introduced Cedric Sellvan. Sellvan is a small group leader and checks people into Kids Quest. He has a situation with his son. At 18 he hooked up with the wrong crowd and even ran afoul of the police. He moved out and later on moved back in and rededicated his life to Christ. Philippe came and spoke about how his son was re-baptized and how when he came up out of the water he was a new person. His son wants to be a chef and is working in a restaurant currently. Then the auditorium broke down into small groups and people prayed for these situations. The person behind me was praying for their family to accept Christ. That included Kevin, Lynn, Laura and several other names. At 8:59 David Platt turned the meeting over to Larry Cooper. They had the results from elder election. 383 voted and all the candidates were elected. The new elders stood up and of course Larry Cooper is David Platt’s yes man.

McLean Bible Needs to Address the Issue of Sexual Abuse

McLean Bible needs to address sexual abuse. Sexual abuse is tearing apart the Southern Baptist Convention. Recently McLean Bible had an incident with an alleged predator in The Rock Ministries. They badly mishandled the situation. Keep in mind that this happens after the Mark Aderholt and Anne Marie Miller sexual abuse situation as well and that being covered up by the International Missions Board. You can read more about that in, “Anne Marie Miller’s Alleged Sexual Abuse by Mark Aderholt, and Did the Southern Baptist’s International Missions Board Cover it Up? Plus David Platt’s Response” and “A Closer Look at Derek Gaubatz the General Counsel for the International Missions Board. Does “Religious Freedom” Mean the Right for the Southern Baptists to Cover Up Sexual Assault?” McLean Bible get your act together, this blogger is not impressed with your organization when you had serious allegations under the hood.

Pictures of the congregational meeting notes. 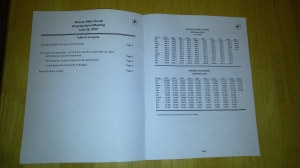 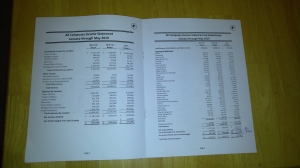 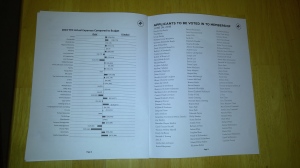 4 thoughts on “The June 26, 2019 McLean Bible Congregational Meeting Write Up, and How McLean Prayed for a Catholic to Become a Christian”