This post looks at the relationship between two Acts 29 churches in the Washington, D.C. area. Jordan Kauflin’s Redeemer Arlington and Bill Riedel’s Redemption Hill. This looks at two churches who can be considered to be cult like and are to be avoided by people in both Arlington, Virginia and Capitol Hill in Washington, D.C.

“The corruption of the best things gives rise to the worst.”

“Corruption is worse than prostitution. The latter might endanger the morals of an individual, the former invariably endangers the morals of the entire country.”

“If your brother or sister sins, go and point out their fault, just between the two of you. If they listen to you, you have won them over.

Acts 29 churches are very much cult-like and work closely among each other. This blog is dedicated to writing about Redeemer Arlington. It was born out of an incident from someone from Redeemer. This blog also is focused on writing about the Evangelical Free Church of America (EFCA). In the Eastern District stands Bill Riedel’s Redemption Hill. I have long wanted to look at the relationship between Redeemer and other Acts 29 churches such as Redemption Hill or Jason Conner’s Portico in Arlington and Clarendon, Virginia. Today we are going to look at the relationship between Redeemer Arlington and Redemption Hill.

Redeemer Arlington was the last church plant in the Washington, D.C. area of Sovereign Grace Ministries before it erupted into scandal in 2011. Redeemer was founded in 2009. You can read a comprehensive history of Redeemer Arlington in, “The History of Eric Simmons’ Redeemer Arlington: Formerly of Sovereign Grace Ministries now of Acts 29.” Plus you can see a policy document from Eric Simmons explaining why he broke away from Sovereign Grace in, “Why Redeemer Arlington Separated from SGM Ministries; Eric Simmons View of SGM and the 9 Marks Elephant Again in the Room.” Sovereign Grace had massive problems with child sex abuse which plagued the organization. C.J. Mahaney’s organization covered up child sex abuse so casually, it is like a teenager flipping a hamburger at MacDonalds. You can read about the child sex abuse issues in SGM in the following Washingtonian article. Redeemer joined Acts 29, which has its own problems coming from the DNA of Mark Driscoll in the organization. For example who can remember when Driscoll gave a sermon in Edinburgh, Scotland about how a blow job brought someone to Jesus at Mars Hill in Seattle. You can read about that in, “Reflecting on a Controversial Mark Driscoll Sermon About how a Repentant Woman Gets on Her Knees and Performs Oral Sex.”

Redeemer and Redemption Hill Working at Plant Shaun Cross’s Union Church in D.C. and Other Points of Connectivity

Redeemer Arlington worked hard at planting Shaun Cross’s church in NE Washington, D.C. Shaun Cross was once a part of Redeemer Arlington if my research is correct. Redeemer sent him off to plant Union Church. Also involved was Bill Riedel’s Redemption Hill. I wrote about Redemption Hill’s efforts in, “A Response to Acts 29 Bill Riedel and Shaun Cross on When Church Planting Harms a City.” No doubt in planting Union City Church Redeemer and Redemption Hill worked closely together. They had to especially when it came to financial issues, logistics, and other questions.

When Acts 29 has its regional conference and local D.C. events again all the Acts 29 churches operate in the same functions. They also probably refer members to each other and covenant and “release” only to other Biblical churches like themselves.

Jordan Kauflin Leading Worship at Redemption Hill in April of 2019

Redemption Hill it appears lost its worship pastor. If I recall correctly the last individual came from the Austin Stone in Texas. While looking for another worship pastor Redemption Hill invited Jordan Kauflin from Redeemer to lead worship on April 7, 2019. You can read the announcement on social media below. 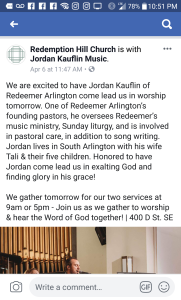 Concluding Thoughts on the Relationship Between Redeemer Arlington and Redemption Hill

This blog has long considered Redeemer Arlington to be a cult. Its problems have been documented at this blog through the multiple posts that have been written. A couple of years ago I wrote a post that asked, how healthy is Redemption Hill? You can read that in, “Acts 29 Bill Riedel’s Redemption Hill in Washington, D.C.; How Healthy is It?” This post has illustrated that Redemption Hill is also toxic and should also be considered cult like. There are other reasons to explain why and I will get into that soon. The best advice I have for people who are looking for a place is to stay away from both Redeemer Arlington and Redemption Hill.