A planned PR blitz on Instagram to support James MacDonald is scheduled to occur tomorrow December 22, 2018. Allegedly organized by a couple of elder wives this blog would like to ask, is this any different than a PR operation in North Korea?

“Many cults start off with high ideals that get corrupted by leaders or their board of advisors who become power-hungry and dominate and control members’ lives. No group with high ideals starts off as a ‘cult’; they become one when their errant ways are exposed.”

“When people leave cults, they don’t know that they left a cult.”

While they were there, the time came for the baby to be born, and she gave birth to her firstborn, a son. She wrapped him in cloths and placed him in a manger, because there was no guest room available for them. 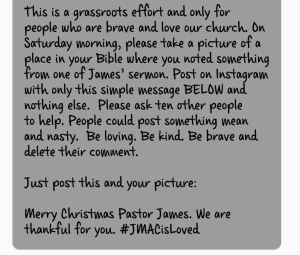 A message confidentially being shared amongst the Harvest Bible Chapel community.

Is this organized PR rally in North Korea any different than this PR blitz organized by Harvest Bible Chapel Elder wives?

This is a quick post to address a planned PR blitz that will be occurring on Instagram on Saturday December 22, 2018.

A Planned Instagram Campaign on December 22, 2018 Allegedly Organized by Some Elder Wives

This evening one of my many sources connected to Harvest Bible Chapel shared some more information with this blog. Tomorrow morning there is an orchestrated blitz on Instagram that is designed to support James MacDonald.  If my sources are correct this was organized by a couple of current elders wives. In the face of criticism, a lawsuit against The Elephant’s Debt and Julie Roys, and the sharp critical eye by the media, members of Harvest are being asked to show their love of James MacDonald. The picture of above is being shared in confidential messages coaching people how to respond. The message also encourages people to delete “negative” comments. For the record and this question goes to the elder wives putting this together, how do you define negative? How do you define nasty? How do you define mean? People are being asked to contact ten other people and do a very public push to support James MacDonald.

Is this Further Evidence Harvest Bible Chapel has Become a Cult?

When I heard this I was puzzled and baffled. The other day at Julie Roys blog she wrote a post about how Randy Williams stated that James MacDonald is trying to run Harvest Bible Chapel like a cult. Is this further proof of how Harvest Bible Chapel has become a cult? In thinking this over I was struck by how this was organized, the methods being done behind the scenes in planning this make it appear like its spontaneous. The following question I ask with all honesty. Is this any different than a PR rally held in North Korea to show public affection and love for Kim Jong Un? Look at the video up above. Can you imagine something similar to that occurring at Harvest Bible Chapel in Elgin? What troubles me about this and what shows me that this is a cult is how people are being told to show public love for their leader. After all how is this love when people can’t be spontaneous and they have been coached on this? But let me ask you the following question. Does this planned PR campaign show that Harvest Bible Chapel has become a cult?

How Former Members and Upset Members Can Respond with Possible Hashtags

In the spirit of the Twitter parody account @MegaChrchPastor which I wrote about in, “#CTisMyBitch: James MacDonald Parody Account of Mega Church Pastor on Twitter” this blog would like to organize a response to James MacDonald and Harvest Bible Chapel. Here is what I am suggesting you do both on Instagram and Twitter. Have a picture of The Elephant’s Debt logo and blast it out under some of the following hashtags.

That is it for the day guys, lets communicate our thoughts and feelings about Harvest Bible Chapel to James MacDonald.

7 thoughts on “Is a Planned Instagram Campaign to Support James MacDonald Prove How Harvest Bible Chapel Has Become a Cult?”