I took communion for the first time in two decades. As fate would have it the second time was the last time I would do so with Dad before his death on November 21, 2018. This post is a reflection on Catholicism. It explains why I pushed back in college and what attracts me today and the problems that still exist inside. The biggest concern is the child sex abuse crisis inside the Roman Catholic church.

“I think the beauty of Catholicism is its consistency through both successes and difficulties. I’ve counted on my faith to give me strength through both training and competition – but also in school, with my family and everyday life.”

“In Pope Francis, I see a leader who lives every day in the image of Jesus. Under his guidance, the church is focused once again on providing comfort, compassion and salvation for sinners, the poor, and those who seek peace in an increasingly complex world. That’s my Catholicism.”

“Blessed be the Lord God of Israel,
for he has looked favorably on his people and redeemed them.
69 He has raised up a mighty savior[a] for us
in the house of his servant David,
70 as he spoke through the mouth of his holy prophets from of old, 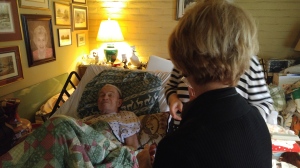 My Dad about to receive communion for the last time.

This post is going to look at Roman Catholicism and explore my thoughts about it. I have a lot to say and share, and some of it ties in with my Dad’s death.

My History with Catholicism

I grew up in a Catholic family. Dad was Irish from Butte, Montana while Mom was Polish and from the South Side of Chicago. My family had strong roots in Catholicism. After I was born I was baptized in the Catholic church as an infant. I went to Catholic school and then Catholic High School growing up. In my time as a Catholic I participated in First Communion, Penance, Reconciliation, and more. For the first twenty years of my life I engaged in Catholicism.

It was at a Catholic college in Montana that I pushed away from it. What bothered me? I heard so much about Oscar Romero and liberation theology that I felt like I was guilty for his death due to how it was taught.  What also troubled me was how Mary was treated and it came across by some like she was deified. Also at the time I respected the Mormon church and thought Mormons and some evangelicals took the faith more seriously than Catholics. This would later be a mistake. After my experience in Mormonism in college I got involved in charismatic Catholicism. It was almost Pentecostal, and influenced by the movement out of Steubenville. Ohio. But in time I pushed back and got involved in evangelicalism with Campus Crusade at Fresno State and shortly Fresno Evangelical Free. And for the next 18 years I would be mostly outside Catholicism.

Evangelical Christianity has been a major disappointment for me. There has been a lot of scandal, problems and issues. What troubles me is the following issues that I have encountered.

That is but a sampling of the issues that I can describe that trouble me.

What I Respect About Catholicism

I have spent more time sitting in some Catholic churches these last few years. I went with Mom and Dad and my family when they asked. I wanted to respect them and give them comfort and peace. My thoughts on Catholicism gradually changed over the course of time. They have deeply improved.  These are the issues that I have respected about the Catholic church.

For me this is a strong list and features many attributes of Catholicism that I respect and admire. However, the Catholic church is not without its problems.

What Bothers Me Now About Catholicism

The biggest issue for me that troubles me deeply is the child sex abuse scandal which seems to get new life in different parts of the globe or the United States. A few months back in writing a post I spent 30 to 45 minutes reading a good chunk of the Pennsylvania Grand Jury report that detailed the cover up of child sex abuse, pedophilia and more inside the state of Pennsylvania. You can read that post in, “As the Catholic Sex Abuse Scandal Unfolds in Pennsylvania Let’s Remember the Sex Abuse Scandal in Sovereign Grace Ministries. The Complicity of The Gospel Coalition, and D.A Carson Defending Mahaney by Attacking Someone Who was Raped at 13.”After spending time reading a couple of chapters I was sick to my stomach. I was deeply disappointed in the Catholic church engaging in such a cover up that lasted several decades. This is a major problem that still needs to be dealt with. The situation seems to grow, from Chile, to Honduras, and Ireland and more. This is a cancer that threatens the Catholic church in my opinion. The church needs to come clean and deal with the problem. No child should be abused, raped or covered up inside Catholicism.

Up above you have my history, how I left and what draws me back and what I still struggle with today. So let me tie this into my Dad. When my Mom died my sister was cleaning and she came across a note that Dad wrote to Mom years ago. In the note Dad expressed his disappointment in me leaving Catholicism. He was frustrated that I was outside Catholicism. When I heard that I was not angry at Dad instead I tried to spend more time with him going to Mass or more when I was able to see him. When my Dad’s illness progressed due to his brain tumor he became bed bound in the front room of the house. When he couldn’t take communion because he could not go to mass the church sent someone to the house.

When I was with my Dad and someone arrived to give him communion I was asked if I wanted to receive communion. Thinking of how Dad felt and what he believed I wanted to honor him. I wanted to make him happy and give him some comfort in the illness he was dealing with. So I took communion two times on two consecutive days. The last time was on November 19, 2018. That is the date of the picture above. I took communion to honor Dad. I didn’t know it at the time but it would be the last and final time I would do so with Dad. He would enter the hospital on November 20, 2018 for the last time and died on November 21, 2018.

In taking communion I wanted to honor Dad and knowing how he felt about me. I hope that gave him peace and comfort. I hope he felt like I respected and loved him in practicing Catholicism before him. Life is too short to be torn apart by religious disagreements. But in the wake of everything that happened I have peace about doing this for Dad. There are no regrets. Had I declined knowing how active Dad was in Catholicism then I would have had regrets. However that is not an issue today.  For me it reminds me of how complicated religion can be.