The Wondering Eagle sat through Harvest Bible Chapel in Fairfax, Virginia this morning. I wanted to try and understand what people are emailing and telling me. What I sat through was the most intense worship service that I have come across. Concerns about Harvest culture being hard to de-tox is deeply concerning. Plus the question needs to be raised based off what I learned this morning. Does James MacDonald still have influence in the Great Commission Collective churches?

“Traditions are the guideposts driven deep in our subconscious minds. The most powerful ones are those we can’t even describe, aren’t even aware of.”

“No culture can live if it attempts to be exclusive.”

Obey your spiritual leaders, and do what they say. Their work is to watch over your souls, and they are accountable to God. Give them reason to do this with joy and not with sorrow. That would certainly not be for your benefit. 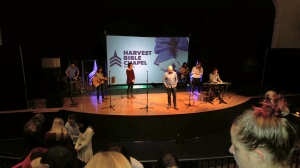 Jeff Hoenshell is from West Liberty, Ohio. He attended the Word of Life Institute and then Moody Bible Institute where he studied pastoral ministry. He then obtained his Masters of Divinity from Southeastern Baptist Theological Seminary in Wake Forest, North Carolina. He also led worship at Union View Baptist Church in Frankinton, North Carolina from July 2010 until August of 2015. Jeff was a church planting pastor for the Vertical Church Network.  He then came to Harvest Bible Chapel Fairfax in March of 2016. You can look at a post at the Harvest Fairfax blog that wrote here.

The service started at 10:00 and I arrived a couple of minutes after the service started. I was greeted by Matt who I later learned is a graduate of Grove City College. When I walked into the auditorium I was shocked with what I saw. I noticed that the curtains were draped so that everyone was forced together largely toward the front of the auditorium . I would say about 50% of the people were forced to be upfront. You could not be someone who sits in the back and observe. The seat I had was in the front. Also what bothered me is that everyone had to pray together. I walked in on the middle of that experience. No one was solo, people were paired in groups. In writing The Wondering Eagle  have sat through Acts 29, former Sovereign Grace, and Sojourn Network and never saw anything like this play out. The worship was intense and better than my former Third Wave church in Wisconsin. It also was better than the former Sovereign Grace service that I observed.

What I had entered into was a bubble. It was a bubble that was removed and cut off from the world and independent thought. It felt controlling and elite to other churches I have sat through. As I looked around the school auditorium there were about 100 to 150 people present. The medium age seemed to be in the thirties though I did see a couple of older people there as well. One aspect I realized with Harvest is that it is all about the brand. The brand had to be protected at all costs. Jeff Hoenshell  started by praying on his knees. It came across as an act and one of emotion. I never saw that happen at any other place I sat through and observed. Jeff talked about authority and how questioning God’s authority was dangerous. I sat about twenty to thirty feet away from him and the Harvest Bible Chapel pastor was yelling. I never saw or heard yelling like that in such a context in a small service. Everything was about authority, authority and authority. I remember sitting there thinking to myself that Jeff’s view of God is small especially if you can’t question him at all. He praised people for not being in rebellion against God. Why? Because they were in church. When he spoke about people being afraid of other people he pushed Ed Welch’s “When People Are Big and God is Small: Overcoming Peer Pressure, Codependency, and the Fear of Man (Resources for Changing Lives)” I last wrote about Ed Welch a few weeks back in the context of Jordan Kauflin’s Redeemer Arlington. You can read about that in, “Does Evangelical Culture Contribute to Pornography? Plus the Torment Accountability has Left in My Life.” When I heard Jeff Hoenshell preach about God and how you couldn’t question God I actually saw God as being the ultimate snowflake. Someone who could not deal with differing thoughts or questions. The service was authority and manliness on steroids. When Jeff spoke about how God will deal with those in rebellion I wondered to myself if James MacDonald is included in that perspective. As soon as the service was over the guy sitting next to me wanted to talk. His name was Ian.  And then one of the Harvest Elders Matt Rumbaugh swooped in and wanted to speak. The attention I was given really stunned me. It reminded me of the love bombing from Redeemer Arlington. When I left and as I grabbed lunch I thought about the experience. It was one of the more intense experiences I encountered. I thought to myself if Sunday mornings were this intense what was small group and more like? Based off the emails I am receiving from people I now could understand as to why people had a hard time detoxing from Harvest. The Harvest network is not healthy by any means. As I was leaving music from Mars Hill was playing in the background.

How Healthy is Harvest Bible Chapel Fairfax and Other Churches in the Great Commission Collective?

8 thoughts on “An Experience with Harvest Bible Chapel Fairfax. Plus how is James MacDonald Viewed by the Great Commission Collective?”