“Corruption is authority plus monopoly minus transparency.“

No one lights a lamp and then puts it under a basket. Instead, a lamp is placed on a stand, where it gives light to everyone in the house. 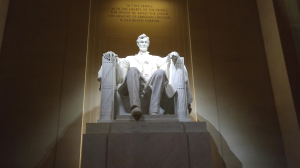 The Lincoln Memorial at night.

I heard that you (my former pastor) and the Elders of Harvest Bible Chapel (my former church) filed a defamation lawsuit against Ryan Mahoney, Scott Bryant, Ryan’s and Scott’s wives, and Julie Roys.

I read the 66 page complaint and am left with a sobering reality: That you and the church think of me and the 2,499 other ex-members as property, as assets that belonged to you before they were dragged away by two bloggers who now must payback what is “rightfully” yours.

First, neither you nor Harvest Bible Chapel ever owned us. Our tithe was to God, which we gave you to steward.

We heard you make excuses and displace blame for the massive debt.

We were there when you publicly – and wrongly – slandered and excommunicated two Elders and censured a third Elder. (You issued an apology a year later, and we still wonder why it took that long.)

We searched for and found public documents that showed that you took out a very large mortgage to build a very large home, after publicly committing to more modest lifestyle choices “for the sake of Christ.” (Quoting February 2014 Elder update)

We heard you, Elders and pastors evade questions and obscure the truth about the breakup of Harvest Bible Fellowship. We read the church financial statements that showed HBF gave money to Mark Driscoll’s church (which was shocking given the purported purpose of HBF and the history of Mr. Driscoll).

We heard you attack from the pulpit anyone who had frustrated and upset you, especially if they no longer attended Harvest. Similarly, we witnessed you misuse the pulpit to defend yourself and your actions.

We heard your sermons becoming progressively less rooted in Scripture and more rooted on your personal feelings and experiences.

You – not Ryan Mahoney, or Scott Bryant or the internet at large — are the reason why we left HBC after many years of attending. serving and tithing.

Praying for you, still.