This post is a write up of the McLean Bible congregational meeting from June 27, 2018. This took place at the Tysons Corner campus. This is an overview of church business and New City Network church plants.

“All the news that is fit to print.”

Motto for the New York Times

The Lord is not slack concerning His promise, as some count slackness, but is longsuffering toward [a]us, not willing that any should perish but that all should come to repentance.

Picture from the September town hall meeting. The infamous one where Elder Cooper lied about McLean Bible joining the Southern Baptists.

Larry Cooper should be delighted! After what he said about the notes of the last congregational meeting The Wondering Eagle was happy to attend and take notes as I continue to write about McLean Bible in light of the theological coup that took place. For those interested the last time I wrote about Larry Cooper is when he lied about McLean Bible joining the Southern Baptists. “According to Christianity Today McLean Bible Joined the Southern Baptist Convention in 2016; If True Why did Elder Larry Cooper Lie Before the September 21, 2017 Town Hall Meeting?” Think of that in light of David Platt’s sermon about elders being above reproach.

The meeting started at 7:31 and they had Loudoun, Prince William, and Montgomery County connected by live feed. McLean Bible Arlington actually came to Tysons Corner. Larry Cooper said that the good news is that they had a quorum. They had light talk about David Platt moving from Richmond, Virginia to Northern Virginia. They had a motion , and a second and 134 people became new members of McLean Bible. You can see McLean Bible’s new members below. 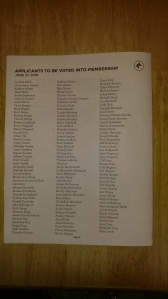 Elders John Baber, Craig Proulx, and Tom McMahon were up for reelection. It was explained that if the elders were reelected their term would be extended until 2021. People voted and they said the results would be announced at the end of the meeting. David Platt came up to speak at 7:41. David said that he is excited as this is his first congregational meeting. He understands how important finances are especially after what happened at the Southern Baptist’s International Missions Board. Speaking of the finances below are the church fiances as it was available. 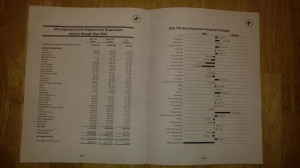 David Platt wanted to spend some time dissecting McLean Bible’s motto, which is, “We glorify God by making disciples and multiplying churches among the nations beginning in Greater Washington, D.C.” For the next half hour or so they discussed and broke down that statement in various. ways. David Platt went back to what he taught out of Deuteronomy 6 about how people are exploring, believing, growing, and multiplying. He had “Jorge” give a testimony about his life and it was mentioned how Jorge was involved in planting an evangelical church in Normandy, France.

Mike Kelsey got up and spoke about multiplying churches. There are five campuses at McLean Bible – Tysons Corner, Arlington, Montgomery County, Prince William and Loudoun. Coming online are two more campuses in the D.C. area, one in Maine and the other at Fairfax in Mosaic. Maine is led by Joshua Roulhac and Fairfax Mosaic is led by Aaron Nichols.  McLean Bible is also launching micro sites across the D.C. area. The goal is to take the church to the people. 31 micro sites have been launched. A couple of examples are in assisted living and in the Fairfax Adult Detention Center.  At 8:18 Clint Clifton at the New City Network spoke. If I heard correct $1.4 million was used in launching 55 New City Church plants. Clint briefly mentioned Veritas Church which is meeting in Georgetown but has not officially launched. Then  he spoke about Collective Church which meets in Frederick, Maryland. Collective is led by Michael Bartlett. Then Clint said that he was at All Peoples Community Church (which is Acts 29) and watched them send off their first church plant. The Wondering Eagle has had a warm relationship with Kenji Adachi’s church. This church was planted in conjunction with the New City Network, and Acts 29 Fellowship Memphis. Fellowship Memphis had a dark scandal where the worship pastor engaged in voyeurism and made child pornography in a church. Fellowship Memphis also covered it up. For the latest with Fellowship Memphis and Rick Trotter you can read, “Exploring the Role that Bryan and Crawford Loritts Played in Covering up Rick Trotter’s Voyeurism at Fellowship Memphis. Plus How Rick Trotter Got Off Easy Because of the Loritts Family Behavior.” To read more about the issues with All People’s Community Church you can read, “When Neo-Calvinist Church Planting Becomes Idolatry: Kenji Adachi and All Peoples Community Church” and “An Open Letter to Kenji Adachi (Senior Pastor of Acts 29 All Peoples Community Church in Fairfax, Virginia on my Concerns about your Fellowship Memphis Training and Other Issues)” New City Network is preparing 7 new church plants. They are also bringing in an Iranian pastor to work with Persians in the D.C. area. Upcoming church plants abroad include Normandy, France and Iceland. Jess Thompson from New City Network spoke briefly about the upcoming New City Gala which is taking place October 5 at the Museum of the Bible. The last point talked about is sending of Mika and Cyress to North Africa to work with Yemen refugees. Yes I heard the comments don’t write about this on Facebook, etc… But as McLean Bible is moving in a 9 Marks direction in time they will brag. Steve Jennings a 9 Marks pastor in the United Arab Emirates bragged about Pakistan and 9 Marks going in that location. I wrote about it in, “Does the Christian Community in Pakistan Need Mark Dever’s 9 Marks?“

They ended the meeting people giving testimonies as to what God is doing in their neighborhoods.  One teacher of a D.C. Charter School spoke about starting a Child Evangelism Fellowship. Daniel of McLean Bible in Montgomery County talked about running in a park and having a discussion with someone. Cheryl from McLean Bible in Prince William spoke about being hurt in a church and telling an atheist to ignore the news about Christians and read the Bible. Ben Munrouz of McLean Bible in Loudoun County talked about an experience in Beach Week. The last testimony was of am ex-Muslin from the Middle East who became a member of McLean Bible around Easter time. Larry Cooper then announced the elder election results and all three elders (Tom, Craig and John) had their terms extended until 2021. The notes from the last congregation meeting were read and approved. The Wondering Eagle makes a motion for these meeting notes to be approved at the next McLean Bible congregation meeting.

In the near future I am going to do a lot of analysis of the New City Church plants. Its one of the many items on my schedule to research and write about. If there are members that have issues with child sex abuse, membership covenant, shepherding theology, Neo-Calvinist issues, or more let me know as I would love to learn more about those topics.

2 thoughts on “The June 27, 2018 McLean Bible Congregational Meeting Write Up”