This is a guest post from atheist Karen Garst with a look at a selection from her new book “Women v. Religion: The Case Against Faith – and For Freedom.” This post looks at the issue of evolution and abortion. After all when women miscarriage is “god” responsible for a failed pregnancy? Is “god” an advocate for abortion?

“The theory of evolution by cumulative natural selection is the only theory we know of that is in principle capable of explaining the existence of organized complexity.”

“My personal feeling is that understanding evolution led me to atheism.”

“There are no shortcuts in evolution.“ 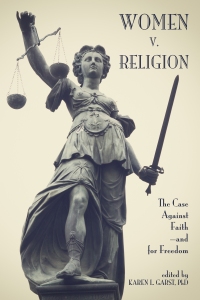 This is the last of the three posts that I am running for Karen Garst who blogs as the Faithless Feminist. Her new book which is coming out is a compilation of a series of essays.  The title of her new work is called, “Women v. Religion: The Case Against Faith – and For Freedom.” The two previous posts are as follows, “Guest Post: Karen Garst’s New Book on Women v Religion, an Atheist’s Perspective. A Look at the Topic of Shame from Religion” and “Guest Post: Atheist Karen Garst Selection from Her New Book: How Children are Indoctrinated into Religion.” Today’s post deals with the issue of evolution and also abortion in the form of an essay from Abby Hafer.

I have always been a firm believer in science, and have accepted evolution as truth when I was younger. Science I believe should play an important role in day to day life and evolution is a part of life. The ability of species to survive and adapt is crucial and key. The other fact to consider is that there are species that can and do change their sex depending on environment. I am drawing upon previous lessons from Biology in high school but that can not be forgotten. The  other topic in the essay Karen has is that of abortion. The issue that is looked at is the following. Does “god” cause abortion? What happens when you have an ectopic pregnancy? Or when a miscarriage takes place? Is “god” responsible for such situations especially if he authors life? This can be found in Karen’s book which will be released soon. These are much needed topics that need to be discussed and its my hope that this will become a part of the discussion.

Had I been a more adventurous young woman or born at a later time, I am sure that I would have pursued biology as my field of study. I remember learning about evolution in my ninth grade science class in the 60s. I was hooked. I wrote a paper about early man – Australopithecus erectus, Homo Neanderthalensis, etc. that I held on to into late adulthood. As I was still a practicing Lutheran at the time, I rationalized that god probably breathed the substance of life into Neanderthal or maybe Cro Magnon. To this day, my husband and I watch many documentaries about the rise of mankind and I enjoy them thoroughly.

Abby Hafer followed up on her passion for biology and became a university professor. She is also an atheist and writes an intriguing (and quite humorous) essay for my new anthology – Women v. Religion: The Case Against Faith – and for Freedom. I don’t want to reveal too much about what she wrote but the first section completely dispels the belief that the first creature was a male. And if you think the animal kingdom is composed of only binary sexes of male and female, you are sorely mistaken. There is one creature that comes in seven sexes. Thus, one type can mate with the other six. Let’s hear it for a free for all! Uffda, as we used to say in North Dakota.

The points Abby makes in her essay about women’s bodies are spot on. As you well know, many Christians believe in an “Intelligent Designer.” Vice-President Mike Pence is quoted as one of these believers.

The truth of the matter, is quite the opposite, however. As Abby explains, evolution has only one concern – perpetuating a species. Virtually every change that occurs from one generation to the next is random and only the changes that improve survival are the ones that are likely to survive. In the case of women, there were a number of conundrums. As early man started to walk upright, the pelvis became narrower. I guess it’s hard to walk on two feet with big hips. Who knew? They also developed a larger brain case. Other animal species can wean their offspring in a short amount of time, but for humans, that just wasn’t possible. Why? Because as the pelvis became narrower and the brain case larger, women adapted to giving birth to less mature infants so that she could actually give birth to them. So if you remember having pain during childbirth and having to diaper your child for two years, this is why. Even today, giving birth is not a walk in the park. Abby points out the number of women, even here in the United States, that used to die in childbirth. In the early 1900s, six to nine women died for every thousand live births.[2] In undeveloped countries such as Afghanistan today, it is much higher – a woman had a one in thirty-four chance  of dying as a result of pregnancy over the course of her life in 2010.[3]

But there are other flaws as well. You may have heard of the word fistula. It refers to a rupture in the tissue in the birth canal that occurs during prolonged childbirth. Unfortunately, the digestive system and urinary system are nearby which can results in leaks into the vagina. With the advent of modern medicine, a caesarean section is often performed when labor lasts a long time in order to avoid a fistula. However, where it is not, the condition can lead to death or incontinence, shaming, and sometimes even banishment of the woman. Fortunately, there are clinics set up by charitable organizations in some countries that can correct the damage done and restore a decent life to these women. Abby would say that an Intelligent Designer has some explaining to do to these women.

Abby also explores the issue of abortion. Conservative religious people are opposed to all forms of abortion, but they don’t often pause to realize how often “god” causes abortions. It is not uncommon at all for an egg that is fertilized not to implant on the uterine wall or for an implanted embryo to detach early on from the wall. And as most women already know, miscarriages are all too common. If you have heard that god is the biggest abortionist, you’ll learn why in this essay.

Abby discusses many other issues related to the ones listed above. I hope that you will have a chance to read the full essay in Women v. Religion: The Case Against Faith – and for Freedom.