This brief post is about how some Christians celebrated and remembered the memory of Martin Luther King. On the 50th anniversary of his assassination in Memphis The Gospel Coalition held a conference in the same city to discuss racism. The Roman Catholic, mainstream and liberal Protestants also marked the day. This post also looks at the history of the Memphis Sanitation Strike and the King assassination.

“Our lives begin to end the day we become silent about things that matter.”

“In the End, we will remember not the words of our enemies, but the silence of our friends.”

Greater love hath no man than this, that a man lay down his life for his friends. 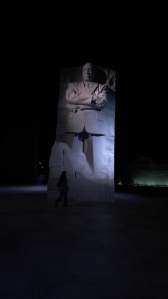 Robert Kennedy speaking to the crowd in Indianapolis on Martin Luther King’s death.

1968 would be a polarizing year in American history. While I am going to talk about Martin Luther King and Memphis, if you want to learn more about the historical background of other events then I would read the following post. “1968 vs. 2016 and Against Conflict and Uncertainty Together 2016 is Held in Washington, D.C.” On February 11, 1968 black sanitation workers for the city of Memphis staged a strike. They started a walkout to protest unequal wages and working conditions. Whites who had worked for Memphis sanitation had higher wages and more benefits. In addition several blacks were killed on the job due to unsafe working conditions. When it rained or snowed in Memphis whites were paid if they stayed home from work, whereas blacks were not paid and still required to report for work. 700 out of 1,100 blacks who worked for Memphis then agreed to the strike. Memphis mayor Henry Loeb was the mayor who continued and increased some of the policies that led to the strike. A few days after the strike began, garbage began to pile up in the streets. 10,000 tons to be exact. Loeb hired what unions call scabs. Scabs are people that are hired to work in place of the striking workers. The white strikebreakers increased the racial lines, of which Memphis struggled with deeply. The strike became prominent in the Civil Rights movement of the 1960’s. Martin Luther King first became involved on March 14, 1968. A demonstration on March 28, 1968 turned violent with a 16 year old boy who was killed. The funeral was held at Clayborn Temple, and despite pressure for it to be a closed casket, the family refused.

On April 3, 1968, Martin Luther King returned to Memphis  a second time and gave what would be his final speech at Mason Temple. The speech that King gave is known as the Mountaintop speech, and you can watch that above. The following day King was staying in the Lorraine Motel in room 306. King had spoken to musician Ben Branch about the music for the event that evening and went out on the balcony At 6:01 p.m. King was shot and the bullet passed through his arteries and he bled to death. The shot came from across the street from a boarding house and people saw  a man, who would later be James Earl Ray running from the scene. Police found binoculars and a rifle with his fingerprints on them nearby. On April 4, 1968 in response to the assassination some of the most violent riots took place in American history. Riots broke out in 100 cities to include Baltimore, Washington, D.C., Chicago, Kansas City, Wilmington, Cincinnati, Pittsburgh, and Trenton.  New York City did not have riots because Mayor John Lindsay upon hearing the news traveled into Harlem and spoke to people in mass and asked them not to riot. He regretted King’s death and stated that his city government was working against poverty. Also notable is what Robert Kennedy did while he was campaigning for President. Against the advice of police Kennedy went into the inner city of Indianapolis and spoke to the crowd form the back of a flatbed trailer. He appealed to people to not riot and for the first time publicly spoke to the assassination of his brother in Dallas in 1963. That speech is up above and I would encourage you to watch it. Historians regard this speech as Robert Kennedy’s finest. Today in Indianapolis a monument stands where Kennedy spoke, in 1968. The assassinations of 1968 were not over and a few weeks later Robert would be killed in Los Angeles celebrating the winning of the Democratic primary.

On April 8, 1958 a march led by Coretta Scott King and the Southern Christian Leadership Conference attracted 42,000 participants. And agreement was reached on April 14, 1968 and the strike ended. The assassination of King led to a new era of black activism. Some decided to embrace violence while others reaffirmed their commitment to peaceful demonstrations. If you want to read more about the assassination of Martin Luther King the Washington Post had some good articles about the history of the assassination and riots in Washington, D.C. which you can read here, here, here, here, and here.

MLK#50 and how Other Christians Marked the Anniversary

In Memphis, Tennessee The Gospel Coalition in coordination with the Southern Baptists Ethics and Religious Liberty Committee held a conference to honor and discuss the legacy of Martin Luther King. The conference was for Christians to reflect on the situation regarding racial unity as well as the church and the culture. The goal is to get Christians to reflect on our past and contemplate a way ahead. The conference is being held in the Memphis Convention Center. The conference has Eric Mason, Matt Chandler, Jackie Hill Perry, John Piper, Russell Moore, Benjamin Watson and many others. Below is the schedule for the first day of the conference which is called MLK#50Conference.

The Gospel Coalition is far from being the only Christian organization commemorating the anniversary of Martin Luther King’s death. Some of the progressive evangelicals, mainstream Protestants and Roman Catholics also marked the occasion. A number of Catholic churches across the United States held a special mass to honor the occasion. You can read about this from the Cincinnati archdiocese.  Below are some articles that look at the anniversary of Martin Luther King from differing perspectives.

Martin Luther King is a man I deeply respect. I say that knowing about his flaws and shortcomings. Despite that this is a man in my mind who braved a lot and stood against the tide. Being on the right side of history is important, and yet its not always popular. When I was putting this post together I had read that in King’s autopsy his heart and been strained so much that it looked like it belonged to a man in his 60’s. The stress he was under must have been intense. I imagined deep down he probably knew he was going to be assassinated one day. That said, what is tragic is what he could have accomplished had he lived. What could he have done in the 1970’s, 1980’s, 1990s’? The other challenge is that King showed how much our culture and history has struggled with racism. We still have a major problem with racism. From my perspective I thought we were farther down the beaten path, yet reality teaches us otherwise. Just in the past couple of years I have heard things that I never thought we would hear and its time to admit that we have a long way to go. Max Boot wrote an article that hit home for me, which you can read here. Its in that context that I hope the memory of Martin Luther King can unite people and bring races together. King was incredibly articulate and he was doing what needed to be done. In many ways I am grateful that The Gospel Coalition and many other Christians are addressing racism and other topics. Yes we need to be honest that the church is deeply segregated. However, we also need to be honest and admit that some people have made racial reconciliation into a business and have exploited it. I wrote about that in, “From Remnant Church in Richmond to Fellowship Memphis in Tennessee, Does Acts 29 Exploit African-Americans in the Name of Racial Reconciliation?” While some have criticized social justice I also think it plays a role in the Gospel. How it can be explained away by some Christians is troubling. So in that spirit I want to commend those that took the time to honor and respect Martin Luther King. May we move forward and come together in the spirit of one. That is my hope. If you want to comment on what Martin Luther King means to you feel free to do so below.

One thought on “From The Gospel Coalition to the Catholic Church: Remembering the 50th Anniversary of the Assassination of Martin Luther King on April 4, 1968”