This is a compilation of a number of issues going on in the secular humanist and atheist realm. David Silverman writes a solid article about how atheists cannot tolerate intolerance. The Secular Student Alliance is moving to Los Angeles while facing a revolt and dealing with allegations of sexual harassment. And the Freedom from Religion Foundation is challenging pastors housing being tax exempt. Some of the issues in this post I would like to dive into more detail about in separate articles in the future.

“Trust the instinct to the end, though you can render no reason.” 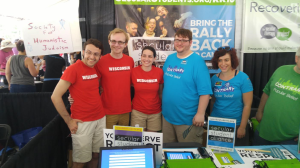 University of Wisconsin students from the Secular Student Alliance at the Reason Rally in 2016.

George Carlin in Touched by an Atheist

There are a number of issues to report on in the atheist or secular humanist communities. I have been sitting on some of these stories for some time and decided to do a post that combines several of the topics together. Before I continue if you did not know Barry Lynn from the Americans for the Separation of Church and State is retiring. I would like to do a post that researches and overlooks his career. So expect that coming down the pike, its one of the many developments that I have been following.

United Coalition for Reason on how Science Defeats Religion

I follow the website for the United Coalition of Reason regularly. They had an article recently written by James Haught that looks at how science has clashed with religion over the course of time. That clash has exited from the time of Ancient Greece with Anaxagoras teaching that the sun and moon are natural objects while others believed them to be deities, up to modern times with the Scopes Monkey trial in Dayton, Tennessee. The article puts the perspective of religion clashing with science in much ot history regardless of the faith system.  You can read the article in “Science Always Defeats Religion.”

The Secular Student Alliance (SSA) was officially recognized on November 21, 2001 through the non profit laws by the State of Ohio.  SSA broke free from the Council of Secular Humanism. SSA grew from Ohio to  advocate and promote scientific and critical inquiry, democracy, secularism and human based ethics. It grew from 80 groups in 2007 up to 407 groups in 2013. SSA is a founding member of the Secular Coalition for America. The SSA is moving to Los Angeles, California and some believe their move is the organization trying to fix their reputation. Some of the campus chapters are rebelling and money has allegedly dried up. Some groups raised concern about how the money was being handled. Also the SSA is dealing with some allegations of sexual harassment.  Due to the groups relationship with Richard Carrier revenue has dropped by 40 percent over the past couple of years. Carrier is facing allegations of sexual harassment including to the president of the Arizona State University. The Secular Student Alliance continued to host Carrier despite the allegations. Carrier is going after those who have spoken up claiming he is being defamed. The College Fix wrote about the issues facing the Secular Student Alliance including sexual harassment. You can read more about it the Fix’s “Student atheism group faces revolt from campus chapters as cash dries up, staffers fired.” Plus the Daily Caller also has written about this situation in “Atheist Student Organization Faces Revolt From Campus Chapters Over Funding, Sexual Harassment.” I would like to research this situation and do a stand alone post on these issues as I think they are worth writing about. Its a goal of mine at The Wondering Eagle to do a profile and write up of each of the major secular humanist or atheist organizations.

At Hemant Mehta’s The Friendly Atheist David Silverman, the President of American Atheist wrote an article about how atheists can not be silent on intolerance. David writes that since atheists have been discriminated against, atheists should speak up and be a “big tent.” David writes this in the article:

“Because of this, American Atheists is obliged to say, in no uncertain terms, that we will not tolerate intolerance — from neither our neighbors nor our government. The current tolerance for bigotry is what emboldened white nationalists and neo-Nazis to rally in Charlottesville in August. Their views are reprehensible, their actions are abhorrent, and they have no place in our civil society. American Atheists stands in complete solidarity with the targets of this hatred.”

David goes on to state that if you think that the Neo-Nazi rally in Charlottesville was good, atheists don’t want your money or support. If you think discrimination is okay, then in the atheist community you will not be welcome. You can read the entire article in “Shrinking the Tent: How American Atheists Won’t Tolerate Intolerance.” Plus if you want to read the statement by the American Atheists on the Neo-Nazi rally in Charlottesville you can do so here.

The Freedom from Religious Foundation (FFRF) has filed and won a major legal battle that deals with clergy housing being tax exempt.  Wisconsin district judge Barbara Crabb recently ruled against pastors using the clergy housing as a tax break as unconstitutional. The clergy housing tax break is a 60 year old rule that excludes rental value of a home from taxable income for U.S. clergy. Barbara Crabb ruled that the tax emption violates the establishment clause of the US Constitution. If the 7th Circuit Court of Appeals upholds Crabb’s decision then this would apply to pastors in Wisconsin, Illinois and Indiana. What helped the challenge become successful is that the FFRF changed how it compensates its leaders based off the clergy exemption. The United States Department of Justice then found itself defending FFRF but the IRS disagreed. The issue went back to court which eventually led to this situation it appears. You can read more about this in a Christianity Today article called, “Atheists Again Get Pastors’ Best Benefit Ruled Unconstitutional.” This is a topic that I also would like to explore in a stand alone post sometime in the near future, but I want to do a brief write up to get this information out there.

A few months back I saw the following article in the Huffington Post called, “Why Are Atheists Generally Smarter Than Religious People?” The article asks if atheists are generally smarter then religious people. The theory is that those who are atheist rise above their instinct and learn to think differently. They can be more intelligent because they are not relying on their instincts. In Ancient Greece and Rome religious people were looked at as fools. In 2012 the Journal of Personality and Social Psychology published a study that showed how college students often get logical answers wrong but do not realize it. The “bias blind spot” occurs when people can not detect or acknowledge their bias. Those who can acknowledge their blind spots have higher cognitive ability. If religious people are not likely to see their own bias what it means is that they are less rational in many respects. The article in the Huffington Post looks at the issues of basic instinct, the philosophical reasons for why this can be and the relationship between religion and stress. I would encourage you to read it.

This is going to be a shorter post than usual but these topics I have been trying to figure out how to handle them, especially since a couple have issues that I would like to research and write about in more detail. Plus I worked to get most of this done before I left Washington, D.C. for the holiday to be in California. That’s it for the day guys, take care of yourselves.

5 thoughts on “Secular Humanist Compiliation: David Silverman from American Atheist on how Atheists Should not Tolerate Intolerance, The Secular Student Alliance Moves to Los Angeles, California Under a Cloud and Other Secular News”