An open letter to Arizona Senator Jeff Flake thanking him for his brave and bold speech in the United States Senate the other day. Jeff talked about speaking from his conscience this is me following suit and doing the same thing and speaking from my conscience.

“It is clear at this moment that a traditional conservative, who believes in limited government and free markets, who is devoted to free trade, who is pro-immigration, has a narrower and narrower path to nomination in the Republican Party, the party that has so long defined itself by its belief in those things. It’s also clear to me for the moment that we have given in or given up on the core principles in favor of a more viscerally satisfying anger and resentment. To be clear, the anger and resentment that the people feel at the royal mess that we’ve created are justified, but anger and resentment are not a governing philosophy.”

Better to be poor and honest
than to be dishonest and a fool. 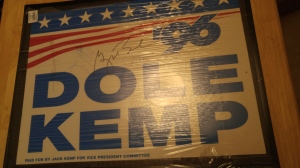 I want to take some time out of my life to pen you a personal note and tell you how much I have appreciated you being in the Senate, and to ask you to continue to fight with your conscious and take a stand. Your speech the other day which I have above I believe will go down in the history of American politics. It will be up there with Illinois Senator Everett Dirkson’s talk before voting on the 1964 Civil Right Act or Wisconsin Senator Robert La Follette speech in 1917 during World War I in which he still called for free speech to occur during wartime. The other thing Jeff is you and I are on the same side of history. I left the Republican party as I was following my conscious in 2016 after Donald Trump was elected. You are arriving at that conclusion now. Let me give you a little background to myself.

I have voted Republican about 95% of the time in my life. The first time I voted was for George Bush in 1992. I voted for Barack Obama in 2008 because I was upset about the Iraq War. You should know that I have walked precincts in college when I was in Montana. And you should also know that I led the Republican Club in college. I also had the privilege of attending the Republican National Convention in 1996 in San Diego. My family saw me on C-Span on the floor of the San Diego Convention center. I remember seeing many Senators and Representatives. Then I had something that stunned me that I still smile about to this day. I was standing next to the Texas delegation when Sam Donaldson from ABC News came rushing by and he bumped into me. In return I bumped into someone standing next to the Texas delegation sign. I apologized and the person turned and it was Texas Governor George W Bush. In his Texas drawl he said, “No problem son…” Stunned, I asked for his autograph. You can see his John Hancock on the sign up above. I tell you all this so that you will understand why I left the GOP and why it was a painful but necessary decision.

In the 2016 election I voted for Marco Rubio in the primary. I like the Senator from Florida and thought he was good, conservative and level headed. I was troubled by Donald Trump and I was sure Rubio would beat him. I was horrified as the primary season went on. The Republican Party I know died in Cleveland at the National Convention and what emerged was something almost in a Frankenstein movie that showed no resemblance to the party I once knew. At that moment I became convinced that to save the party the best thing to do was to vote for country over party. To follow my conscious and not vote Republican because of the stakes and the fears that existed. So this Republican proudly voted for Hillary Clinton. I did so as a protest vote and with my hope that the GOP would lose, organize itself and get its act together. The unthinkable happened and I was stunned by what took place. I realized that the party that had been my home for all my life no longer was. So I decided to leave it and no longer consider myself Republican. Below you will find out what I believe and why I left the GOP, and based upon what you said in your speech Senator Flake I think we are going to be on the same page in many areas.

Jeff I also want you to know this as well. Years ago I sat in a Bible study and people were talking about Dietrich Bonhoeffer. A couple of people as I recall stated how they would speak out against the Nazis if they had a chance. Well…here we are with the Republican Party being silent about these issues, a lot of family and friends being silent and more. Its for that reason why I write this post. Someone must speak out. To be silent is to be complicit. Jeff Flake you are right in that aspect. I cried when I listened to your speech because you are the Republican that I identify with. And yet, you are learning like I learned that traditional conservatives don’t belong in the Republican Party anymore. Ronald Reagan famously said that he didn’t leave the Democrat Party but the party left him. That speaks for me in that I didn’t leave the Republican Party, the party left me. I remain a Never Trumper because I want to preserve the last best place on earth that we call the United States. I have some requests for you Jeff. I want you to drive the issues in the Senate and become a deep thorn in the side of Donald Trump. Remember actions speak louder than words, and I want you to push the Russian investigation and hold Trump accountable when it comes to Russian sanctions. I want you to challenge Paul Ryan and Mitch McConnell to put country over party. If the GOP is going to continue its path of party over country then its going to drag down the country. You know what I do today Jeff? At night I crawl into bed and watch older speeches by George W Bush, Ronald Reagan or even Eisenhower online, You spoke up Jeff, and this is me taking a break from my normal subjects to do a post out of the normal life and speak up in a different way. E pluribus unum should be branded on the heart of everyone who calls this country home. We are rich and strong but we can’t live in a vacuum. That is how democracies are destroyed. Too much is at stake in our democracy for us to stay silent. But I do believe Jeff that the Republican Party now needs to follow the Whigs and the Know Nothing into the history book having been destroyed by Donald Trump. Can you serve our country by working with Evan McMullin and creating a new party for traditional conservatives and moderates? The sooner that happens the better. I also want you to know that I am putting country above party these days. Due to the issues with the GOP I no longer vote Republican. In a couple of weeks we are having the gubernatorial election here in Virginia. From what I have read many believe that this is going to be the first national test for a regular election on Trump. So what I am going to do, is this conservative is going to vote Democrat to help send a message that abuse in power will not be tolerated. But Jeff please be a leader and organize a new party and give people like myself a place to call home. We are homeless. The sad reality is this..if the GOP is going to become home to people like Roy Moore in Alabama or Steve Bannon then the party is going to be a haven for bigots, Neo-Nazis and fascists. There is no excuse now for being ignorant. All you have to do is read and watch the news. But Jeff I love you, and wish I could vote for you. I hope I get to meet you one day.

3 thoughts on “An Open Letter to Arizona Senator Jeff Flake”