“The end of law is not to abolish or restrain, but to preserve and enlarge freedom. For in all the states of created beings capable of law, where there is no law, there is no freedom.”

“Law is order, and good law is good order.“

Everyone must submit to governing authorities. For all authority comes from God, and those in positions of authority have been placed there by God. 2 So anyone who rebels against authority is rebelling against what God has instituted, and they will be punished. 3 For the authorities do not strike fear in people who are doing right, but in those who are doing wrong. Would you like to live without fear of the authorities? Do what is right, and they will honor you. 4 The authorities are God’s servants, sent for your good. But if you are doing wrong, of course you should be afraid, for they have the power to punish you. They are God’s servants, sent for the very purpose of punishing those who do what is wrong. 5 So you must submit to them, not only to avoid punishment, but also to keep a clear conscience. 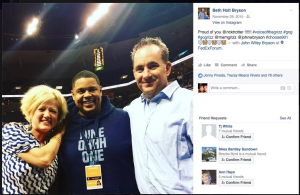 It has been a while since The Wondering Eagle wrote about the ongoing situation in John Bryson’s Acts 29 Fellowship Memphis. There have been 35 articles written about this corrupt church in the Memphis, Tennessee area. The original article that was written is “The Sordid Tale of Rick Trotter, Bryan Loritts, John Bryson and Acts 29 Fellowship Memphis and Downtown Presbyterian Church.” This blog has actually clashed with Bryan Loritts on this issue and you can go through the archives and see the posts that were written. But there is news regarding Rick Trotter and Sandy Willson that needs to be discussed.

The indictments against Rick Trotter were read by Shelby County District Attorney Amy Weirich. Currently Rick Trotter is free on bond. Each count of unlawfully photographing in violation of a person’s privacy is punishable up to 11 months, 29 days in jail and a fine up to $2,500. As The Wondering Eagle looks at this information what it means is that Rick Trotter is allegedly facing at least four years in jail and a total fine of $10,000. A Memphis police investigation revealed that Rick Trotter used his cell phone to take videos of women as he kneeled behind them. The police department investigation uncovered evidence that Rick Trotter downloaded the images onto his church issue laptop computer. In the case of Downtown church the victims are from ages 23 to 63. The person handling the case is Eric Chrsitensen, who is the chief prosecutor of the DA’s Special Victims Unit. You can read the post from the Shelby County District Attorney page here. 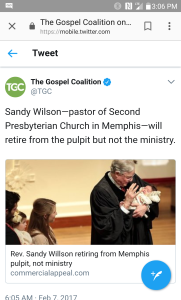