On May 3, 2017 at Fairfax Community Church (FCC) here in the Washington, D.C. area, a night of sharing of stories involving Young Life Capernaum took place. In a church that employs a violent sex offender registered here in Virginia, FCC is promoting a ministry that gets more developmental disabled students involved in Young Life Capernaum. My question is this…are those young children with a developmental disability more at risk of being exploited or preyed upon?

“Fools may have the greatest repository of knowledge but will never attain wisdom.”

“Only a fool tests the depth of the water with both feet.”

“It is being a friend and helping them to get to a place they cannot go on their own. It is sharing Jesus Christ with friends who happen to have disabilities. It is ministering to and being ministered to by Jesus in a wheelchair.”

A few days later, when Jesus again entered Capernaum, the people heard that he had come home. 2 They gathered in such large numbersthat there was no room left, not even outside the door, and he preached the word to them. 3 Some men came, bringing to him a paralyzed man,carried by four of them. 4 Since they could not get him to Jesus because of the crowd, they made an opening in the roof above Jesus by digging through it and then lowered the mat the man was lying on. 5 When Jesus saw their faith, he said to the paralyzed man, “Son, your sins are forgiven.” 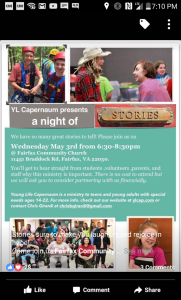 On May 3, 2017 Young Life Capernaum held a fundraiser at Fairfax Community Church. On that night students, volunteers, parents and staff spoke about Capernaum and why it is so necessary. As in many similar evangelical fundraisers people were asked to give money to continue the ministry. If people had any questions they were encouraged to contact Chris Girardi. The event was called “A Night of Stories.” You can see the advertisement above.  I have one question for Young Life Capernaum….as they are interested in stories. Have they heard the story of Eric Nickle and how Fairfax Community Church allegedly concealed the fact that they employ a violent sex offender? There is a lot to say but let’s first look at Young Life Capernaum.

What is Young Life Capernaum?

Young Life Capernaum was founded in 1986 in San Jose, California. Capernaum is a ministry that is designed to help those with special needs and physical and developmental disabilities. Capernaum helps young people with disabilities to grow, learn, and participate in life activities they have often been denied. That is my understanding. The ministry name is drawn from the story in Mark where there were four men with a friend with a disability. The four men carried the person with a disability to see and meet Jesus. When they arrived crowds had blocked and prevented the men from coming near to Jesus. So what they did was take the disabled man to the roof and cut through the layers of straw and hardened mud and lowered the disabled man to Jesus feet.

Some Stats and Information on Child Sex Abuse

Before I continue let me look at some basic facts on child sex abuse that need to be shared. The stats I am posting below come from the National Center for Victims of Crime.

The prevalence of child sexual abuse is difficult to determine because it is often not reported; experts agree that the incidence is far greater than what is reported to authorities. CSA is also not uniformly defined, so statistics may vary. Statistics below represent some of the research done on child sexual abuse.

Studies by David Finkelhor, Director of the Crimes Against Children Research Center, show that:

According to a 2003 National Institute of Justice report, 3 out of 4 adolescents who have been sexually assaulted were victimized by someone they knew well (page 5).

A Bureau of Justice Statistics report shows 1.6 % (sixteen out of one thousand) of children between the ages of 12-17 were victims of rape/sexual assault (page 18).

A study conducted in 1986 found that 63% of women who had suffered sexual abuse by a family member also reported a rape or attempted rape after the age of 14. Recent studies in 2000, 2002, and 2005 have all concluded similar results (page 8).

A child who is the victim of prolonged sexual abuse usually develops low self-esteem, a feeling of worthlessness and an abnormal or distorted view of sex. The child may become withdrawn and mistrustful of adults, and can become suicidal (page 1)

Children who do not live with both parents as well as children living in homes marked by parental discord, divorce, or domestic violence, have a higher risk of being sexually abused (page 171).

In the vast majority of cases where there is credible evidence that a child has been penetrated, only between 5 and 15% of those children will have genital injuries consistent with sexual abuse (page 2).

Child sexual abuse is not solely restricted to physical contact; such abuse could include noncontact abuse, such as exposure, voyeurism, and child pornography (page 1). 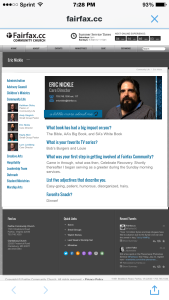 This is from the old FCC website. You can see Eric Nickle being listed there.

Eric Nickle as listed on the Virginia Sex Offender Registry.

This blog broke the news and blew the whistle on the situation. It started when I wrote the following story in July of 2015. “Why Does Fairfax Community Church have a Care Director on the Commonwealth of Virginia’s Sex Offender Registry?” Eric Nickle as I learned was on the Virginia Sex Offender registry. Rod Stafford and FCC had allegedly concealed it from the congregation. I was stunned and felt sick when this situation fell on my lap. I struggled with it for a long time before blowing the whistle and altering SNAP. Contrary to what FCC said Eric Nickle had more access to the church than what was officially said at the time. The men’s purity group met in the nursery a couple of times, and as I recall Eric Nickle got the key to the room from the janitor. At the time I had no idea he was on the sex offender registry. That is how I knew that FCC was being dishonest and deceitful. You can see the screen shots up above and I would encourage you to check the Virginia Sex Offender registry for yourself.

Are Disabled and Developmental Children at Risk? Plus Does Young Life in the D.C. Area Take Child Sex Abuse Seriously?

Some of the most common developmental disabilities include the following. You can have fragile x syndrome, down syndrome, pervasive developmental disorders, fetal alcohol spectrum disorders, cerebral palsy, and intellectual disabilities involved in Young Life Capernaum. Now I want to be careful in what I am saying. I am not criticizing a ministry that helps disabled students and people with emotional disabilities. I think that is awesome and to be commended. What I am concerned about is a Young Life Program occurring in a church that has a sex offender on staff. Many of those people with emotional and developmental disabilities are particularly vulnerable. FCC is being reckless in this area and this deeply bothers me. In many schools, Boy Scout programs, fire and safety programs a violent sex offender would be barred from employment. I am not saying that Eric Nickle should be barred from the church, what I am saying is that  he should not be in the position where he can have access to information and knowledge of people in the church. Today he serves as the addiction recovery and support staff. One of the questions I have is the following…does Young Life in the Washington, D.C. area know that FCC employs a violent sex offender? Are disabled students or those with developmental disabilities at risk in this situation? I plan to follow up with Young Life D.C. and find out, and publish a statement on this ongoing issue.  This was not an easy post to write, but this is a dark and disturbing issue that needs to still be followed.