An open letter to Casey Schmidt of First Free Church in Onalaska, Wisconsin. This is a response to his email in which I remind him that Jesus was committed to truth, and its time many Christians be committed to truth also. Plus where would people like Martin Luther fit in Casey’s construct? I also would like to know when I see the email that Casey sent, how will be able to engage atheists, and people outside his bubble? This open letter will be a jolt to Casey but I hope he will learn and grow from this experience.

“I like people who shake other people up and make them feel uncomfortable.”

“I want art to make me think. In order to do that, it may piss me off, or make me uncomfortable. That promotes awareness and change, or at least some discussion.”

Jesus told him, “I am the way, the truth, and the life. No one can come to the Father except through me. 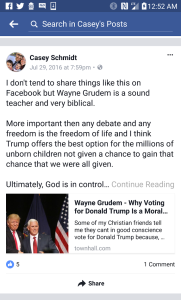 I got your email that you sent me on June 8, 2017 and I wanted to write you a response. I sat on it for a few days to think about and contemplate. Then I also asked a couple of other people to look it over and to get their thoughts.  Your email had a lot in it to think about and indeed question. The most difficult aspect is to ask the question…where does one start?

Some of the most abusive churches that I have written about would love to have you as a member. You seem to think that asking questions or raising difficult or different points of view is “gossip.” That is the vibe your email communicates to me. So you would fit in well with some really dark places I have written about. The problem however is that Jesus is committed to truth. After all he said “I am the way, the truth, and the life” in John 14:6. You reaching immediately for Bible verses about conflict explains why many parts of evangelical Christianity are so toxic. People engage in abuse, then they reference some of the verses you do and the goal is to shut them down and quiet them. The Christian should be committed to truth. And if Christians were committed to truth and honesty today would some church networks like Acts 29, Sovereign Grace and more even exist if Christians cared about truth? If they loved the Lord and worshiped him, then they would be opposed to churches that allegedly cover up criminal activity, child sex abuse, abusive pastors and more. I mean think about this…How can God be worshiped in a church where child pornography was allegedly made? (You can see The Sordid Tale of Rick Trotter, Bryan Loritts, John Bryson and Acts 29 Fellowship Memphis and Downtown Presbyterian Church)  How can God be worshiped in an Evangelical Free in Pennsylvania that practiced church discipline on an alleged sexual assault victim who allegedly had a gun pointed at her by the Senior Pastor’s son and knows that she could be dead? (You can see  Steve Estes and Community Evangelical Free Church in Elverson, Pennsylvania: A Painful Story of Domestic Abuse, Inappropriate Church Discipline, and Failed EFCA Polity) That there in lies the crutch in many parts of evangelical Christianity is that many people don’t go to church to worship God, they go to church for social connections and friendship. God takes a back seat to truth because in some of these churches the goal is then to maintain and preserve the system. How many churches would be folded and closed if Christians were committed to worshiping the Lord and would take a stand against questionable systems? So I want to direct this question and ask you…why do you go to church Casey? Is it for connections and more or is it to worship God? Are you going to be part of the problem or part of the solution?

Here is another point I need to tell you Casey. There are threats to the Christian gospel, but they are not what you think they are. The Christian faith is not threatened by two gay atheist men in their 50’s getting married in Madison, Wisconsin. The gospel isn’t threatened by science, or intellectualism. The Christian faith is not threatened by the continuing secularization of the United States. None of these things are a threat to the Gospel. Instead what threatens the Gospel is blatant corruption within the Christian church. Its churches that allegedly cover up criminal activity. Its churches and Christians who prop up questionable and shady characters like Mark Driscoll or C.J. Mahaney and travel to events like T4G to hear them speak, or shell out money for their products. Spiritual abuse and abusive churches that cause pain are a major threat to the Christian faith. The time has come Casey where the following question needs to be asked. Are you going to be an enabler to this problem by continuing to purchase some of these people’s products? Are you going to be silent and let their questionable activities go forward without being contested? Are you going to practice discernment and for the first time in your life be a Berean?  Many evangelicals have it backward…can you imagine what would happen if Christians exerted as much time and energy to dealing with internal corruption that some have given to the topic if gay marriage? The greatest threats to the Gospel come from within. They are not external, they are internal. And if you believe that the greatest threats to the Gospel are from external issues like gay marriage, science, evolution, and more I have this question for you. How would you have survived and lived your faith in the days or ancient Rome or Greece? If you think external factors are a problem today, then how would you have survived if there were temple prostitutes in Onalaska, La Crosse, Shelby or French Island; which as you know are all nearby.

Here is another question that I have for you as well. When I read your email I had a few impressions that have weighed on my mind. How would you feel about Jesus turning over the tables in the Temple? Is that too non conformist? Would you be opposed to that as well? Where would Martin Luther appear in your construct? Should Martin Luther have nailed his 95 thesis on the door of All Saints Church in Wittenberg, Germany on October 31, 1517?  Was that also inappropriate as well? Should Martin Luther have shut up over the sale of indulgences? Would you have said the same thing in those circumstances? Casey when I read your letter there is another question that comes to my mind and it is this. How are you going to be able to engage people of different backgrounds and differing ways of thought? I mean after all I am towards the edge of the evangelical scene but I still believe in God, and look at how you reacted? How are you going to be able to engage the atheist, the skeptic or others? How are you going to be able to talk? Engage? Listen? Discuss? You can’t share or talk about faith from the comfort of your bubble. You can’t engage from inside an echo chamber Casey. It just doesn’t work like that at all.

As I work through this open letter to you let me share with you some things I have learned about Evangelical Christianity after being involved in it, and still am though more on the edge.

Casey this is going to be a difficult letter for you to process. Your world is being rocked by this letter. You claimed that all I do is focus on the negative…that alone tells me you that you never spent time reading or exploring my blog. If you did you would read what I have written about forgiveness from time to time. You could also have learned about the history of the Evangelical Free, of which First Free is associated. You would also have discovered a few posts about the issue of pain and suffering here, here, here, and here.  Its uncomfortable t o have your views on faith challenged. For me that came about due to a prolonged faith crisis I had. You know Casey, that faith crisis was the greatest gift in my life. Because I wrestled with hard problems like the problem of evil and other hard topics. I am comfortable where I am at, and I can have my views challenged and I am fine with it. So here is what I am going to pray for Casey. In your case I am going to plead with the Lord for you to have a major faith crisis that will shatter your world. By being crushed by the problem of evil then in working and wrestling with these issues by yourself you will be a much better father, husband, small group leader, friend and member of the Christian community in La Crosse. When you go through that faith crisis and you have completed it, I want to hear about it. Then you can write posts like this one and I can smile and say, “I understand, and I know how that feels like.”

Take care of yourself Casey,

BTW – I noticed on your Facebook page that on July 29, 2016 you were extolling wisdom and “sound teaching” of Wayne Grudem. I have that screen shot leading this post. I would recommend you would read “Wayne Grudem’s Un-Orthodox View of the Trinity and the Question that Must Be Asked: Can the ESV Bible be Trusted?” You can learn about Wayne Grudem’s warped views of the trinity and the other problems that exist. So if you have any of Wayne’s books you now are in possession of a lot to toilet paper. It can also be good for changing diapers as well.