Redeemer Arlington joined McLean Bible’s New City Network in 2016. This is a post about this development with this former Sovereign Grace Ministries church. Included is a brief overview of New City Network and  the following question is asked..is this further evidence of McLean Bible’s theological hijacking? After all when I was involved in McLean Bible a number of Christians viewed Sovereign Grace as being a cult or cult like; that was my introduction to Covenant Life Church and its affiliates.

“No team works out teamwork“

But God’s truth stands firm like a foundation stone with this inscription: “The Lord knows those who are his,”[b] and “All who belong to the Lord must turn away from evil.”[ 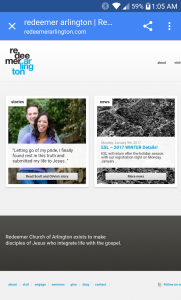 McLean Bible is a large mega church headed up by Lon Solomon in the Washington, D.C. area. Its main campus is in Tyson’s Corner, Virginia. According to the Hartford Institute of Religious Research McLean Bible is the largest mega church in the state of Virginia with an average attendance of 16,500. New City Network launched in 2016 and it is committed to launching churches in the Washington, D.C. area. Since New City Network works with the Southern Baptist North American Mission Board, and the Send Network;  McLean Bible I would suggest is being very dishonest when they say they are non-denominational. Why can’t McLean Bible state that the are Southern Baptist? In addition, the doctrine for the New City Network is adopted from the 2000 Baptist Faith and Message from the Southern Baptist Convention.

Those who are interested in partnering with New City Network are selected through an application process. Allegedly their leadership skills, marriage and family life are considered. (Note to the Apostle Paul…if you want to plant a church…don’t approach McLean Bible…it appears being single will disqualify you…) New City Network is planning to launch 10 church plants in the 2016 and 2017 time frame. This blog has already written about the New City Network and I plan to do a detailed post about it in the near future. You can read about New City Network/9 Marks Del Rey Baptist in “A Critique on 9 Marks’ Del Ray Baptist Church’s Sample Statement on Church Attendance.” Plus there is also Kenji Adachi’s All People Community Church which you can read in “When Neo-Calvinist Church Planting Becomes Idolatry: Kenji Adachi and All Peoples Community Church.” Finally I would direct you to this article about New City Network promoting 9 Marks in “Why is McLean Bible’s New City Network Promoting 9 Marks’ Church Revitalization Conference?”

When Sovereign Grace Was Called a Cult at McLean Bible

I was involved in McLean Bible from 2006 until 2009. I did a mission through Frontline at the time and when I was at McLean Bible I stumbled into a dark and yet open secret that was whispered, and yet common knowledge in the Washington, D.C. Christian community.  The first time this happened was with a friend of mine. My friend explained to me why he was in Catholic education growing up. He lived not far from Covenant Life Church in Gaithersburg, Maryland. I had heard the CLC had a Christian school and I asked him, “why didn’t your family send you to school at CLC?” My friend at the time explained me to that Covenant Life Church and the church organization it belonged to was viewed as fundamentalist, and he mentioned that some people believed it was a cult. When I heard that I was taken back…who calls another evangelical Christian organization a cult? Those are harsh words to say. After all when I thought of cults the first things that would rush to my mind are Mormonism, Scientology and Jehovah’s Witnesses. You can read about it here at The Wondering Eagle but I had first hand experience with Mormonism in college. But at McLean Bible from time to time Sovereign Grace was described and viewed as a cult.  That was how I picked up on the situation on social media with Sovereign Grace Fairfax that led me to pen “Why Does Fairfax Community Church have a Care Director on the Commonwealth of Virginia’s Sex Offender Registry?“ It was openly said and explained as such in conversation. Its wasn’t until I was being invited to Redeemer Arlington in 2011 in the depths of a faith crisis that I put two and two together, and connect the dots when I realized that I was being invited to an organization that many Christians believe to be a cult or cult like. I acknowledge this is a dark and difficult thing to say yet this is just what was said and openly stated.

There is another point that I wish to state as well and this further makes my case. I would content that McLean Bible is in the process of being theologicaly hijacked. I wrote about this in “Not a Sermon Just a Blog Post; McLean Bible’s Affiliation with The Gospel Coalition.” In that post I explored the issues with The Gospel Coalition and how McLean Bible joined that questionable organization. It begs the question if the New City Network is attracting Redeemer Arlington are other former Sovereign Grace churches in the pipeline? Is Redeeming Grace Church  (formerly Sovereign Grace Fairfax) far behind? Sovereign Grace Fairfax is notorious for allegations of covering up child sex abuse. I recall reading s tory on SGM Survivors about Fairfax in which a teenager had molested and sexually abused a child, but the church downplayed it and said that he read John Owen’s “The Mortification of Sin.” The implication was that if you had “sound doctrine” you won’t sin. Personally I would state that many evangelicals are in denial about sin and falsely believe they have “conquered” it by having the right theology. Instead they fail to realize its an ongoing issue, and always will be.  After all look at my situation, I had a guy who boasted of “sound doctrine” and how he was in the “healthiest church he ever knew.” And yet he also taught me why rape and sexual assault are a problem in the United States military. With that guys I said what I needed to say in this post. Please know that I love you!