Tonight The Wondering Eagle remembers a dark anniversary. Two years ago a profound act of injustice took place against Hurit. This is a quick post that remembers this tragedy. Plus The Wondering Eagle is calling for the resignation of Steve Estes. There will be two additional posts in the near future.

“The one thing that doesn’t abide by majority rule is a person’s conscience.”

Harper Lee  -To Kill a Mockingbird.

No, O people, the Lord has told you what is good, and this is what he requires of you: to do what is right, to love mercy, and to walk humbly with your God. 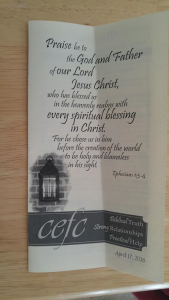 Two years ago tonight in Elverson, Pennsylvania a profound act of injustice occurred in that small town. In Community Evangelical Free Church Steve Estes had coached and allegedly arranged the excommunication of his former daughter-in-law. He protected his son, Brock Estes, who allegedly raped his wife while intoxicated and allegedly pointed a loaded gun on her. Two years ago tonight Mike and Kelly Culbert prayed an alleged rape victim over to Satan. Two years ago tonight Dave Stott carried a bag of rocks on the stage and said “let he who has no sin cast the first stone against Brock.” Tonight two years ago a rogue church in the Evangelical Free Church of America abused its authority. This was all done I believe to protect Steve’s job and Brocks’ job at the Berks County Jail.

On December 4, 2016 Community Evangelical Free Church rescinded its excommunication of Hurit. The church did this not because they were wrong but because of how the church congregation is divided and they are bleeding members. Community Evangelical Free Church admitted no error, made no apology and didn’t invite former members or even Hurit’s family for the roll back of the excommunication.  The act was horrific and in a few days time I will have a detailed post about the meeting and what transpired.

But due to how Steve Estes allegedly pulled off the excommunication and retraction without admitting error;  on the second anniversary of what happened to Hurit The Wondering Eagle is calling for the resignation of Steve Estes as the Senior Pastor of Community Evangelical Free Church. Steve is no longer qualified to lead. I had hoped that Steve would admit his error and do the right thing. After all I would prefer to see him remembered for his influence on Joni Erickson Tada; and not be remembered for practicing church discipline on an alleged rape victim. The Wondering Eagle is calling for Steve’s resignation to take place for the sake of Elverson, Pennsylvania. In the near future I am going to write a stand alone post explaining why Steve Estes needs to resign. This blog still stands with Hurit, the former members of Community Evangelical Free Church and those outraged in the community.

One final note for those of you in Elverson, Pennsylvania who are frustrated with the situation in the town, this blog is celebrating Festivus a week from tonight. For those of you familiar with Seinfeld on December 21, (which is designed to correspond with D.A. Carson’s birthday) we will have the annual airing of grievances. You can see last year’s post right here. This is an opportunity for you to speak your mind about Merle and David Stoltzfus, Steve Estes and Community Evangelical Free Church. That’s it for tonight Elverson and Morgantown. More posts will go up soon and please know I love you.

11 thoughts on “Remembering a Dark Anniversary in Elverson, Pennsylvania”