This will be a brief post but its something that I wanted to do. Today’s post is done in the spirit of Acts 29. This is the 151st Psalm. Its a modern lament that individuals like Chris Davis are pastors, and it is also a lament on individuals who run and act more like Jonah which is what Chris Davis is doing I would suggest.

“Running away will never make you free.”

“Running away from problems or troubles will make you fall into another problem or trouble.” 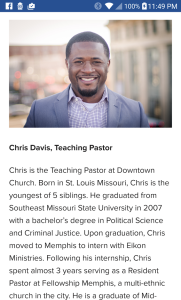 This is going to be a brief post as I am working on another in depth post. On Monday if all goes well there will be an in-depth post about Sandy Willson and overview of Memphis Second Presbyterian. Last night I emailed Ken Van Kampen of the Central South of the Evangelical Presbyterian Church for a statement on both the situation at Richard Rieves Downtown Church and the allegation that Sandy Willson was warned about an alleged sexual predator being on staff in November 2011. So expect that on Monday.  As you very well know in the book of Acts there are only 28 chapters. Acts 29 builds upon that to suggest that they are trying to duplicate or continue the church of Acts. I find it to be a clever marketing scheme, right up there with Wendy’s “Where’s the Beef?” One person in this Fellowship Memphis/Downtown Church situation who needs focus on as well is Chris Davis. There will be a post about him in the near future but I wanted to do something different tonight. Just as Acts 29 builds off the book of Acts, I wanted to do something in the same train of thought. I wanted to do a brief post that is a modern day lament, I wanted to write the 151st Psalm. I dedicate today’s post to Chris Davis and the many pastors who should not be in the pastorate. I honestly wonder how a man can be a pastor if he blocks someone on Twitter who never interacted with him. Chris Davis can not engage culture by dodging or running from it. Plus I would also suggest he is acting more like Jonah in how he is running from his problems. Its with that in mind that I give you the 151st Psalm. This is in the ESV translation, “Eagle Standard Version” 😉

I cry out to the Lord amidst all the corruption, I nash my teeth in asking why?

Where do these situations come from? Why are they allowed to flourish Lord?

What is happening to the shepherds? Why is there such corruption?

Why is there so much darkness in your church?

Lord, I plead that you confront individuals in the Rick Trotter situation!

Lord why is he fleeing? Why is he running?

Does Chris think he can dodge his problems oh Lord?

Why does Chris not care about the damage he has helped create?

And to that wickedness he was allegedly silent!

Why doesn’t this pastor care for the victims who have cried in their bed, in the privacy of their homes?

Why doesn’t he give a damn? Or is he modeling Bryan Loritts?

Lord if this is the behavior of seminary graduates what is the future of the church?

Is he fleeing to work at Bryan Loritts church Lord?

I ask that you confront and deal with his wickedness Lord!

May you convict him when he stares in a mirror!

Please deal with the celebrity pastor phenomena  and the wannabes!

For these requests I will fast and look upon your name with joy!

Hear the injustice and the pleas of the victims at Downtown Church and Fellowship Memphis!

3 thoughts on “In the Spirit of Acts 29’s Fellowship Memphis, Psalm 151…A Modern Day Lament that Individuals Like Chris Davis are Pastors”