David has one question….where did nearly $2.3 million dollars from the Mars Hill Global Fund go? Where did it disappear to? This is an open letter which is being sent to Washington Attorney General Bob Ferguson asking him to investigate the finances of the late Mars Hill Church which was led by Mark Driscoll. Its my belief that fraud took place and church members and citizens of Washington State were the victims of fraud.

“I believe in the power of prayer. What I do not believe in and what I will not tolerate is unlawful businesses that prey upon people — taking advantage of their faith or their need for help — in order to make a quick buck.”

For the love of money is the root of all kinds of evil. And some people, craving money, have wandered from the true faith and pierced themselves with many sorrows.

I am asking for your help and requesting for you to investigative where millions of dollars given to Mars Hill church ended up. Much of the money in the Mars Hill Global Fund disappeared and is unaccounted. I believe that the State of Washington should be deeply concerned as taxpayers were de-frauded. Let me explain this to you.

Mars Hill Church in Seattle had a fund called The Global Fund. In 2011 the Global Fund was re-worked as a means to increase giving. You can read Sutton Turner’s memo in this post by Warren Throckmorton. In the fiscal year of July 2012 to June 2013 nearly $2.3 million was donated. Many people gave this money under the impression that this money was going to be used in places such as Ethiopia and elsewhere abroad. Giving to the Global Fund was robust, for example in December 2013 a little over $340,000 was given. 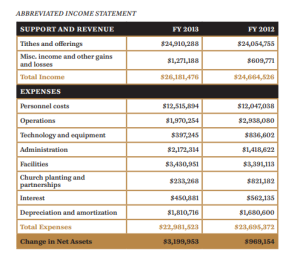 This total from the 2013 statement of income and expenses doesn’t say where the money went. It just basically disappeared. Mars Hill changed the process and means of donations while encouraging people to give. This was confusing because previously money intended for global giving was marked as such. After the changes there were no guarantees as to where the money would go. According to Warren Throckmorton’s blog sources internal at Mars Hill said that less than 5% of the money went to India or Ethiopia. It was also reported at Warren’s website that it appeared that the intent of the Mars Hill Global fund was to use the poor abroad as a means to market Mars Hill. In other words Mars Hill was practicing exploitation.

Global Focus
The vision and activities connected to the Global Fund must focus on reaching the worldwide church. As a person sits in front of his computer in Qatar, London, Cape Town, or Sydney, he does not care about Mars Hill planting in Everett. As an international citizen, however, he cares greatly about global evangelism, global missions, global causes for Jesus, global church-planting, etc. Though the sentiment is rare among Americans, people abroad feel a sense belonging and kinship with the global community.

As you can see Attorney General Ferguson people giving to the Global Fund wanted to give globally and have an impact in places like Africa and beyond. That was implied and that was what attracted people to give to the Global Fund. Next consider this additional paragraph:

Flagship Projects
Of the money that comes into the Global Fund, designate a fixed percentage internally for highly visible, marketable projects such as mission trips, orphan care, support for pastors and missionaries in the third world, etc. (ten to fifteen strategic operations in locations where Mars Hill wants to be long term). This percentage should be flexible (not a “tithe”), and not communicated to the public. Support for Mars Hill Global would be support for Mars Hill Church in general, but the difference and the draw would be that a portion of Global gifts would also benefit projects that spread the gospel and serve the needs of people around the world.

Keep in mind Attorney General Ferguson that this came from an internal memo that was not meant to be seen by the public. The paragraph on the memo notes that this is not meant to be communicated openly. So funds that were raised could be flexible and used for other purposes. So a person could give thinking they are giving to a Mars Hill function in India and instead the money can be diverted elsewhere. But consider this last section here:

The Global Fund could be beneficial in a number of ways, besides the obvious gain of increased funding:
• For a relatively low cost (e.g. $10K/month), supporting a few missionaries and benevolence projects would serve to deflect criticism, increase goodwill, and create opportunities to influence and learn from other ministries.

• Many small churches who may consider joining Mars Hill hesitate because they do not believe we support “missions.” While we need to continue to challenge the assumptions underlying a claim, the Global Fund would serve as a simple, easy way to deflate such criticism and help lead change in these congregations.

• The ability to communicate and interact with supporters of Mars Hill Global provides an avenue for promoting events, recruiting leaders, and developing Mars Hill core groups in strategic cities.

I would suggest that what this section proposes is how fraud takes place. I mean consider…in the above it appears as if Mars Hill believes that the poor are of use to the church and a benefit. Apparently The Global Fund was not used to help the poor as funds were solicited, instead the Global Fund became about church growth to encourage the church to grow bigger and possibly woo other churches into joining Mars Hill. In the business world Attorney General Ferguson we often had to abide by truth in advertising laws. What was sold had to be based off truth and not a false claim. At allbusiness.com here is how truth in advertising is defined:

Dictionary of Marketing Terms: for truth-in-advertising requirements by the Federal Trade Commission as well as various, state and local government agencies, that advertisements not make misleading, false, or deceptive claims. An advertisement can be deceptive without being an outright lie depending upon the perception it creates in the mind of the consumer. For example, a product that calls itself “light” may be nothing more than a slightly lower calorie version of its regular formula but will be perceived to be a low-calorie product. Or a beverage called an “orange juice drink” may contain primarily sugar and water with minuscule juice content. Deceptive advertising can be accomplished with pictures as well as words. In one famous case, a soup manufacturer placed marbles in the bottom of the bowl so that the contents of the soup rose to the surface in a photograph taken for their advertisements. An advertisement can also be considered deceptive if it makes a claim that is true but also leads the consumer to believe falsely that he same claim could not be made by competitive brands. For example, using “fat free” claims on a bottle of maple syrup might lead consumers to believe that other syrups contain fat.

But there is another financial issue that also should be looked at by the Washington Attorney General as well. Mars Hill took $210,000 and spent it at ResultSource, Inc (RSI) to get Mark Driscoll’s “Real Marriage” on the New York Times bestseller list.  In taking this action it is strongly suggested that Mark Driscoll allegedly practiced inurement and that it is probably illegal. Dr. James Duncan wrote about this issue and how it is probably illegal here. Now I am not an expert but I would suggest that this is a federal issue as it deals with the IRS, and not a State of Washington issue. However, it also begs the question…if Mark Driscoll is allegedly circumventing IRS rules and regulations it is well within reason to ask…has the State of Washington being given the shaft by Mars Hill and Mark Driscoll?

Attorney General Ferguson as I study your efforts in the State of Washington these are some of the results of your work. I am deeply impressed and the State is fortunate to have you as the top law enforcement official.

Attorney General Ferguson I could go on but as I read your webpage it becomes very clear that you take fraud and protection of consumers very seriously. It is for this reason that I write and ask you to do the following. I am asking you to investigate Mars Hill Church and if possible recover $2.3 million dollars that disappeared.  This issue was never cleared up even as Mars Hill closed its doors on January 1, 2015. There are people who gave money that still don’t know where the money went. It can’t be documented that it went to India or Ethiopia or elsewhere. If you look at some of the above efforts to recover money in fraud cases this falls well within those boundaries. For example in the case of Wheelchairs Plus which is the first example I cited your efforts resulted in $2.7 million being returned. That is not financially far off from Mars Hill’s missing money from the Global Fund. There are many reasons why I am asking you to look into this situation at the former Mars Hill Seattle:

These are all issues that need attention and your help. You recently intervened in a fraudulent prayer scheme online and helped bring justice in that situation. I am requesting you to intervene in the saga of Mars Hill. It is my belief that fraud took place, and that many people were victims of dishonest fundraising. Money was solicited from them in one pretense and then much of what existed in the Global Fund disappeared. They don’t know where it went, plus you should be aware that there is an active RICO lawsuit recently which was filed. Many of the people who once attended Mars Hill Seattle deserve to know the answers to what happened to nearly $2.3 million dollars. Some gave sacrificially, some gave regularly. When fraud happens Attorney General Ferguson its done to those who are vulnerable and the reality is that anyone can be vulnerable. Its my hope that you will act and start to look into this manner.

I write this with the deepest respect and thank you for your civil service.